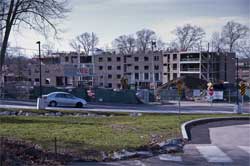 KINGSTON, R.I. – December 19, 2011 – From the south side of the Kingston campus where a new 429-bed residence hall rises from an old granite quarry to the north district where the $75 million pharmacy building is nearing completion, the sites and sounds of construction are inescapable at the University of Rhode Island.


About $192 million in active construction projects and design work are under way.


Students who traverse the Freshman Village are seeing the $42 million Hillside Hall residence go up before their eyes. Steel framing and masonry block are in place. Accompanying the building project is a new Baird Hill Road that features improved sidewalks, crosswalks and traffic patterns. For freshmen and sophomores, Hillside Hall, which is located east of Barlow Hall and south of the Memorial Union, is scheduled to open September 2012. Student housing fees are paying for the project.


Robert A. Weygand, vice president for administration and finance, said the University is seeking LEED (Leadership in Energy and Environmental Design) Silver certification for the new residence, which will be the most energy efficient residence hall on campus.


The five-story Hillside Hall is designed to be the gateway to URI’s undergraduate residential district. The east side of the property will be preserved as woodlands, and existing student residence halls flank the remaining sides. Residents at Hillside Hall will have a convenient walk to the URI Memorial Union and nearby classroom buildings.


“The hardest part of the project is over,” Weygand said. “We had to complete extensive rock excavations in the area of historic quarry, which had provided stone for some of the original Quadrangle buildings. We also had to remove some unsuitable soils. We are now moving quickly to get exterior walls finished and windows installed so we can make the building weather tight. That will allow us to move the project along through the winter.”


Highlights of other projects are as follows:


• Pharmacy building—Those who ride past the north district of campus will notice the exterior of the $75 million pharmacy building is essentially complete. The ribbon cutting for the new facility will be May 4. Initially scheduled to open late this year, the building’s completion was extended for the addition of a $6 million laboratory for good manufacturing practices. Weygand said a favorable construction bid and fundraising made it possible for the University to add the laboratory. A leading feature of the College of Pharmacy’s program for years, the good manufacturing facility was squeezed by space limitations in the college’s current home, Fogarty Hall. The good manufacturing facility will allow URI to once again become a leader in best practices training for the U.S. Food and Drug Administration and private pharmaceutical companies.


Funded by Rhode Island taxpayers through a $65 million bond issue and private fund-raising, the building will triple the capacity of the College of Pharmacy’s current home.


The 142,000 square-foot, five-story structure will allow the college to accept more students in its six-year doctor of pharmacy program, its graduate programs and its new four-year bachelor’s degree in pharmaceutical sciences. It will replace the 66,000-square-foot Fogarty Hall, which was opened in 1964 and designed to accommodate 45 freshmen students and a total of 235 students. Today 700 students and 45 faculty members squeeze into the outdated facility.


In addition to a new medicinal garden, the building will feature a working CVS Pharmacy. The University is seeking LEED Gold certification.


• Student Wellness Center—Design work has been completed on this $11 million project to convert the Roger Williams Dining Center into a state-of-the art Student Wellness Center. The building’s entrance, which will replace the former dining center loading dock, will feature tall walls of glass to complement Hope Commons across Butterfield Road. The center, scheduled to open in fall 2012, will offer free weights, exercise machines, fitness and yoga classes. When students walk to that area, they will see an area of dynamic student activity. The project is being funded by private donations and funding from Student Affairs.


• Mackal Field House resurfacing–The University’s largest indoor facility for recreational sports and fitness and its home for indoor track and field is getting new state-of-the-art surfaces for the four basketball courts and track. The Departments of Athletics and Recreational Services are funding the $1.4 million project to put new surfaces on a concrete slab of 55,000 square feet. Mondotrack FTX is being installed on the track and Mondo Sportsflex M is being installed on the multipurpose court area. The track surface is the same one that will be used for the 2012 London Olympic Games. They are considered the best products on the market for a facility like Mackal, which also hosts the Atlantic 10 Indoor Track Championships, commencement events, admission open houses and high school track events. The track and basketball courts will reopen in early January.


• Student-Athlete Development Center—This $3 million facility will be housed in a renovated and expanded area of the East Gym of the Tootell Physical Education Center. It will be a comprehensive athletic performance and student-athlete enhancement center with classrooms and meeting rooms. The project is being funded by private donations and University resources.

• Butterfield Dining Hall—Once Hillside Hall is completed, there will be more than 6,000 students living on campus, so the need for additional dining hall space is a must. The University is seeking bids for the design work on a 200-seat expansion of the facility in the heart of the Freshman Village. Cost for the project is estimated at $3 million, with a tentative completion date of September 2013. Student dining fees will finance the improvements.


• Chemistry Building—The design work by William Wilson Architects of Boston is complete for the $70 million facility to be built in a portion of the Chafee parking lot between the Chafee Social Science Center and White Hall. Construction is set to begin next summer, with completion planned for September 2014. Of the total project cost, $61 million is being funded through a bond issue approved by Rhode Island voters.

GOING UP: Progress is evident at Hillside Hall, an addition to the Freshman Village, scheduled to open in September 2012. URI Department of Communications & Marketing photo by Michael Salerno Photography.