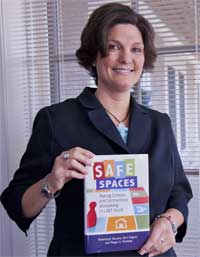 
In one year of her more than two decades of working with college students, three LGBT students attempted suicide at a former school. One died and two survived.


Those and other painful experiences inspired the URI assistant professor of human development and family studies to co-author a new book, Safe Spaces: Making Schools and Communities Welcoming to LGBT Youth. Her co-authors are Gerri August, a faculty member at Rhode Island College who earned her doctorate from the URI/RIC program in education, and Megan S. Kennedy, a professor at Westfield State University in Massachusetts.


The 192-page book is filled with personal accounts of LGBT students fighting hate and discrimination from elementary school through college. Stories of struggle and triumph abound, along with accounts of allies who stepped in to help such students. The authors reference a 2009 national survey that found 85 percent of the nation’s LGBT youth experience bullying at school.


“That painful year when I was the advisor to the LGBT group at my former school stays with me and was a major factor in my decision to write the book,” Vaccaro said.


Drawing on research collected from interviews with students, families, educators and community members, the book chronicles the complex lives of LGBT youth from kindergarten through college. The authors analyzed and collected stories from more than 100 people.


Asked how children in kindergarten would be sophisticated enough to be able to pin down their sexual identity at such a young age, Vaccaro said they couldn’t.


But interviews with LGBT adults show that children often know something about them is different.


Hence the need for a book that for the first time can help elementary school teachers, college administrators, parents, youth coaches and scout leaders build welcoming communities and organizations for all children.


The seven chapters address such issues as “LGBT Identity,” “Sharing the Struggles: The Role of Allies;” “Family: From Exclusion to Nurturance;” “Inside the Classroom,” and “We are Communities.” Each chapter has special sections called Reflection Points and Action Steps to help individuals and groups consider how they can make changes and how to put ideas into action.

“We know that what happens in childhood has a tremendous impact later on,” Vaccaro said.


Vaccaro said because Kennedy is a former teacher and August is a former principal, the trio brings a broad perspective to LGBT issues.


“We want families and other groups to help children be who they are,” Vaccaro said. “The message should be, ‘You are you, and you should be safe and welcomed in your school, on your soccer team and with your scout troop’.”


Such a book breaks new ground in a country where the federal government affords no protection against discrimination based on sexual orientation. In many states, teachers can be fired for being gay or lesbian. Even those who try to build a welcoming community for LGBT students face recrimination.


The book discusses a reading specialist who wanted to expand her library by ordering a number of books from online booksellers that represented LGBT individuals in a healthy and positive light. The following passage illustrates what can happen:


“Tucked inside several books (not all from the same bookseller) were handwritten messages directing her to Bible verses, ones that have been interpreted as condemnations of homosexuality. She was stunned and a bit shaken.”


But Vaccaro’s book also highlights dramatic victories as outlined in the following section on the role of allies:


“Margo had a secret. Since middle school, when her friends’ attention shifted to boys and her attention stubbornly refused to follow suit, she huddled in the closet. And there she remained throughout most of high school.”


Each anti-gay slur in the hallway or those scrawled on the bathroom wall drove her further into silence. In her senior year, Margo began dating and her girlfriend was becoming increasingly important. Margo knew she had to tell someone.


“She sought out her favorite teacher and told her the news. Ms. Clarkson smiled and asked, ‘So when do I get to meet this lucky girl?’ Margo breathed. Tears streamed down her face. Beth Clarkson had just thrown her a lifeline. Margo had an ally.”


The book, published by Praeger, is available on Amazon.com, and Vaccaro hopes that it finds a home in community and school libraries. She is donating a book to URI’s Robert L. Carothers Library and Learning Community.