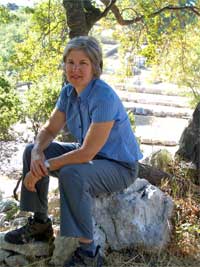 KINGSTON, R.I. –December 14, 2011–-The Archaeological Institute of America has selected Mary Hollinshead of Rehoboth, Mass. for its 2012 Excellence in Undergraduate Teaching Award. The award will be presented to the University of Rhode Island professor of art history next month at the organization’s annual meeting in Philadelphia.


Hollinshead, who grew up in St. Paul, Minn., says of teaching: “I learned by osmosis. My mother taught first and second grade and later returned to graduate school, and eventually taught children with learning disabilities. We used to have many talks about teaching and modes of learning.”


Art history isn’t generally taught in high schools, Hollinshead says, which is a good thing since students come to class without any preconceptions.


“Before taking her survey course on ancient to medieval art, I would have never considered becoming an art history major because I knew too little about the discipline,” says senior Justin Brown. “Professor Hollinshead not only knows about what she teaches, but she teaches what she knows in a manner that engages her students. Even outside the classroom she is very accessible and is always willing to provide help when and where it’s needed.”


Brown says much of what he learned with Hollinshead, particularly his writing skills and the responsibility involved in individual research, will continue to help him after he graduates. 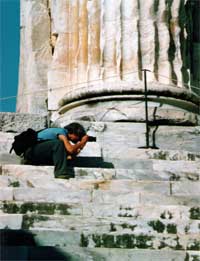 “Students in my classes learn both visually and verbally. I try to incorporate approaches that allow students with different learning styles to succeed,” says the award-winning professor.


Still, Hollinshead was a bit surprised to win a teaching award. “I expect a lot from my students,” she says. “But I see that as a matter of respect. I’m tough on them and want them to perform at the highest level. That said, I also provide whatever support they need.”


Hollinshead is a Classical archaeologist who works on material from ancient Greece, Rome and earlier cultures located in the Mediterranean region, ranging from 3,000 BCE to 300 CE. “Some people feel you have to be so serious, so reverent studying antiquity,” says she lowering her voice for emphasis. “I find a lot of it amusing. It’s accessible and fun.”


Hollinshead’s research no longer involves the actual digging of sites. Rather she studies architectural components in sites that have already been excavated to try to solve questions they raise. “In archaeology, you never have the total picture,” she says. “It’s like playing with a partial deck, so we need to establish the evidence for every statement we make, treating each category of evidence (pottery, sculpture, texts, architecture) according to its own strengths and limitations.”


While Hollinshead’s work is mostly on land, she has had undersea experiences. Famed undersea explorer Robert Ballard, who also teaches at URI, requested her expertise for a 2006 research trip, which explored the archaeology and geology of the Aegean and Black seas using advanced deep-sea technology.


The art historian and five colleagues—Bridget Buxton, Ian “Rod” Mather, and John Jensen from URI’s History Department, Will Krieger from URI’s Philosophy Department, and Kris Bovy from the Anthropology Department—discovered common ground and created the URI Archaeology Group. The six professors team-teach a three-credit interdisciplinary course, Archaeology Frontiers, which challenges students to think beyond the norms, or the borders where perception of possibilities exceeds available knowledge.


Senior Amanda Ouellette’s favorite course with Hollinshead was a seminar on Classical archaeology. “She has a way of incorporating difficult and thought provoking concepts into the curriculum that fosters class discussion. She is always willing to help students out, whether it is material in her class or with graduate school and career advice. During her lectures, she often asks for student input and ideas, which produces a more interactive learning experience,” says the art history major.


URI alumnus Donald Rodrigues who earned his undergraduate degrees in art studio and English in 2000 and his master’s degree in English in 2011 is now a teaching assistant in the University’s English Department. He says Hollinshead played a vital role in shaping and directing his academic and post-academic life. “Mary’s intellectual tenacity is matched only by her compassion, qualities that have earned her a reputation as one of the brightest and most beloved teachers at the University of Rhode Island,” Rodrigues wrote in support of Hollinshead’s nomination for the award.


Hollinshead recognized Rodrigues’ academic abilities when he was a sophomore. “Within months, we began discussing research possibilities and building an academic relationship that would lead, in part, to my nomination for the 1999 Rhodes and British Marshall scholarship competition. As a first-generation college student without solid financial support, I wasn’t sure I’d be able to continue my studies into the following semester. Being nominated for a Rhodes scholarship wasn’t even a distant dream for me; the daily reality of working full-time while attending school consumed, seemingly, all of my available energy. But Mary recognized my talent and insisted that I harness it intelligently and dutifully.”


Rodrigues was a finalist for both scholarship competitions. While he eventually chose to earn a doctorate in English, his former professor continues to influence his work.


“I often look to her–and recall her brilliant, kaleidoscopic office space–each time I spot a promising, shy student sitting in the back row of my class,” he says. “Mary has shown me that teaching is a political act in the truest and best sense of the term. It is a daily opportunity to challenge, engage and empower even the least likely of minds, regardless of what major they choose upon exiting the classroom.”


URI 2008 alumna Samantha Henneberry, now a graduate student in the History of Art Department at the University of California Berkeley, recalls Hollinshead’s influence: “Mary makes the past available to everyone, encouraging her students – and I speak from personal experience – not only to bring their questions after class or to hash out difficulties they might be having with the material, but to see the study of ancient Greek and Roman art, which many see as out of reach, strictly traditional, or exclusive, as a field full of possibilities and open to anyone with a passion. I wouldn’t be where I am today if it were not for Mary’s encouragement, mentorship, and friendship.”