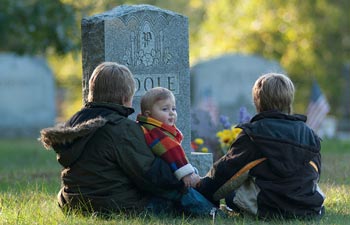 KINGSTON, R.I. –December 13, 2011—‘Tis the season to be merry, yet not everyone can put on a happy face. Grief and loss don’t take a holiday.


While many families must deal with sorrow during celebrations, a University of Rhode Island professor urges family and friends not to overlook children.


What do you say to a child who has lost a loved one? Probably nothing.


“It’s the elephant in the room,” says Carolyn Hames, an associate professor of nursing at the University of Rhode Island, who focuses on grief and loss in children and adolescents.


“Adults want to protect children and not expose them to painful events. It’s the single biggest error. The result is we disenfranchise children. When there’s a death in the family, kids learn their family’s cultural norms for grief and mourning by observing adults. Adults are their role models; when they don’t talk about the loss it compounds the children’s belief that things must be really bad. So bad, that is unmentionable. That which is unmentionable is unmanageable. Death becomes frightening to them and they don’t ask questions.”


One out of five American kids will have a parent die by the time they graduate from high school. Many more experience other significant types of loss. “It is very possible that a significant amount of high risk behavior, acting out, school failures, and juvenile delinquency are triggered by childhood and teen losses that are not recognized or grief that is not supported.”


Children grieve differently than adults and they mourn differently, depending on their age, according to Hames.


“Grief is limited by a child’s developmental stage,” says the expert. “Children understand death, loss and grief only to the extent of their capacity at a given point in time. As they mature, they reprocess the loss with expanded insight and understanding. So, in effect, they re-grieve.”


* Toddlers: Egocentric. “Daddy died so who will read my book?

* School Aged: Understand permanence, that things don’t reverse themselves. Emerging fears and curiosity. “A bad thing has happened to my family so I need to be tough.”

* Teenagers: Who am I? Has need to fit in, does not want to be different, will pretend, just to be normal. “I’m fine. I don’t need any help.”


Although there is very little literature on it, the URI nursing professor believes that babies grieve. “If they are old enough to attach, they are old enough to grieve,” says Hames whose early professional experiences with death as a pediatric nurse at Children’s Hospital Boston compelled her to want to help families deal with loss after they walked out of the hospital doors.


Everyone grieves differently, but there are two distinct styles of grieving:


* Intuitive Grieving: An intuitive griever is someone who is reflective and shares their thoughts and emotions with others.

* Instrumental Grieving: An instrumental griever is someone who releases grief by doing and thinking. They are more physical, someone who would lay stones to create a memorial walk, for example.


One style is not better than the other. “Personalities and styles of grief should be recognized and honored,” says Hames, noting that grieving styles can clash among family members and unintentionally create roadblocks to healing. For example, an intuitive child would not thrive in a family environment where no one talks about the deceased and where all pictures of the deceased have been removed. Or the teenager who vents his anger and feeling of loss through sports and comes home to a mother who continually asks him: How do you feel? Husband and wives can and do clash in styles, which can create conflict.


A primary loss is followed by other losses, referred to as secondary loss. For instance, one spouse dies. The couple always took a summer vacation with another couple. However, the next summer, the widow doesn’t get invited to go along.


Children also experience secondary loss. For example, if a father dies, it might mean that the family house has to be sold. The move might require the child to go to a different school. Family income is cut in half. Mom may have to work or work longer hours. These are compound losses—loss of friends, loss of the familiar, and loss of time with the surviving parent.


Should adults bring children to wakes and funerals? “If the child is old enough to go on a family picnic, the child is old enough to attend a family funeral,” says Hames. “However, the child needs to be prepared. If a child is going out on Halloween night for the first time, adults typically explain what will happen and what to expect. The same should be true for funeral rituals. After the explanation of what will happen, I firmly believe that a child should be given a choice whether or not to attend.


“So many teachable moments get lost when there’s no discussion. I know an 11-year-old child whose dad died. The Irish wake and the funeral that followed involved a lot of stories and laughter about the deceased. Misunderstanding these cultural rituals, the child grew angry, mad that people were making fun of his dad.”


So what do you say to a child who has lost a loved one? “Have the guts to mention the deceased,” advises Hames. ”That gives the child permission to talk, lets them know you are willing to have a conversation, and honors the memory of the loved one. The best way to start the conversation is to share a memory. One of the things children fear most is that they—and others–will forget their loved one.”

ABOUT THE EXPERT: Carolyn Hames joined the University of Rhode Island’s nursing faculty in 1972. She currently holds a dual appointment: she is an associate professor of nursing, teaching introductory and community health nursing courses, and she is associate director of URI’s Honors Program, overseeing the senior students Honor Projects and teaching honors thanatology courses. She is actively involved with the College of Nursing’s Weyker Thanatology Endowment and many of her activities and publications focus on these interests.


Ten years ago, she co-founded FRIENDS Way, a nonprofit organization located in Warwick, R.I., which offers free peer support groups for children, teens, and their families who mourn the death of a loved one. She is currently on the board of directors, is responsible for volunteer facilitator training, and oversees one of three program nights.