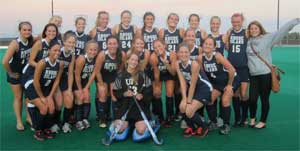 KINGSTON, R.I. – December 9, 2011 – One of the most important members of a sports team is the coach. How could a team survive without one? The University of Rhode Island’s club field hockey team not only survives; it thrives. That’s largely because of its four hard-working captains, who led the team to its first appearance at the National Field Hockey League championship tournament this fall after a 5-2 regular season record.


The team had only five hours to plan its entire trip to the national tournament, which was held in Virginia Beach, Va. Each teammate was responsible for contributing $150 toward the bus and hotel.


“We were very proud of our success in making it to the national tournament this year,” said Hamner. “We didn’t win at nationals and had a couple of difficult games, but we have a very young team, and this was a great learning and bonding experience for everyone.”


Miezejeski said that at nationals, the team was able to play against and learn from teams from all over the country.


“When we play the same group of teams from the northeast, we are used to the way they play,” said Miezejeski. “It was good for our team to see the style and skills of the other teams to gain new knowledge of the game.” 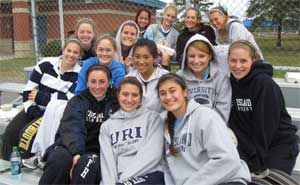 The team enjoyed the 10-hour bus ride from URI to Virginia Beach, watching movies, doing arts and crafts, and chatting about the upcoming tournament.


“The ride back from the national tournament started out fun, but by the end, we were all exhausted from the long weekend away,” Miezejeski said. “We drove down on Friday, played Saturday, and watched the championship as a team on Sunday. We drove back that evening, arrived back at school at 1:30 a.m., and all went to class the next day!”


The trip was strictly scheduled, but when they weren’t playing, the athletes found some time to explore the Virginia Beach coastline together.


In addition to playing for the team, the captains also coach and schedule games and practices. The field hockey team practices four times per week on a field off of Flagg Road. The athletes usually have games on the weekends during the fall season.


After URI’s varsity Division I field hockey team was cut several years ago, some students who still had an interest in the game decided to start their own club team. This was the team’s second official season. None of the current team members ever participated in the varsity program, making their successful season that much more impressive. There are 88 teams in the National Field Hockey League and the top 16 are invited to the national tournament.


Field hockey is typically a fall sport, but the team tries to remain involved during the spring. The captains plan to hold practices, participate in a tournament, and coordinate a brief spring season with other schools.


“One of our goals as captains for this season was to make the team more close-knit,” said Miezejeski. “In the past, we have always gotten along well, but I wanted the team to be friends off the field, too. We hold pasta dinners and get together regularly, which makes the team feel much more connected.”


Since the field hockey team is a club sport, it is partially funded by the Student Senate, with members responsible for annual dues and other fees. The team has a small senate account, which it uses to reimburse teammates for carpooling to games, which can be as close as Providence and as far away as Vermont. Beyond that, each player is responsible for paying $175 annually.


The field hockey team holds several fundraisers throughout the year to help defray costs for the athletes. Last year, the team raised $1,300 from a pancake breakfast at Applebee’s, helping with projects at the Graduate School of Oceanography, and selling candy. The proceeds paid for gas reimbursement, referee fees, league entry fees, tournaments, and supplies. This year, the team will conduct even more fundraisers during the off-season, in hopes of raising $6,000 so that the team can fly to Maryland for a spring tournament instead of driving.