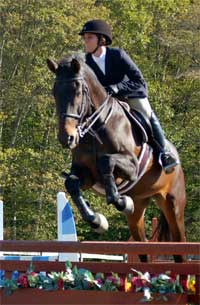 KINGSTON, R.I. – December 6, 2011 – The University of Rhode Island’s club equestrian team is a unique group – with its small group lessons, fundraising efforts, annual dues, and an impressive record to boot.


The team is coeducational, but has an all-female roster of 32 this season. Epright said this makes for a large equestrian team, even by URI’s standards; the University has a history of being one of the bigger teams in the region.


The URI team has finished the season ranked second place in the region for the past several years. It competes against Brown University, Johnson & Wales University, Rhode Island College, Roger Williams University, Assumption College, Becker College, the College of the Holy Cross, and the University of Massachusetts Dartmouth.


Steere-Maloof is an experienced coach and knows what it takes for an equestrian team to succeed. This is her eleventh season coaching an Intercollegiate Horse Show Association team and her sixth year with URI. She has led her teams to victory in the past, which then attracts other talented riders to the program each year. The size of URI’s team, in turn, benefits the Rams at shows since they have so many competitors in each division.


The equestrian team welcomes students with all levels of horseback-riding experience. This year, there are a few members who rode as children but not during high school, and one student who had never ridden before.


Each host school is responsible for supplying horses at their home shows. Many schools bring in additional horses from other sources, and the URI team tries to bring up to four horses to other shows, upon request of the host school.


While equestrian is often considered more of an individual sport, people tend to forget that the riders do have to depend on a teammate when they compete – the horses. The team members develop relationships with their own horses when practicing, but since they are usually using other horses at shows, they do not have much time to get to know their personalities, which can be a challenge when competing. Epright said that after being on the team for a few years, riders become familiar with other schools’ horses.


Since the equestrian team is a club sport, the team is partially funded through student activity fees, but team members are required to contribute individual member dues. The equestrian team members pay dues of $250 each year, and they are responsible for purchasing their own show and riding apparel. To help defray costs, all horse equipment, or tack, is supplied, and the teammates try to share clothing as often as possible.


The team typically raises several thousand dollars every year to help pay for all team expenses, including the coach’s salary, board and care for the team’s horses, and gas reimbursement for driving to shows. This year, the team’s fundraising committee will sell decals for car windows, which were designed by a team member who is studying art and art history at URI, and calendars. The team also finds sponsors to purchase advertisements in their program and charges registration fees for other schools attending the URI home show.


Fundraising serves as an opportunity to raise money for the team and fosters close relationships among the riders. Epright said that the fundraisers are all great team-building efforts.


Unlike other teams, the equestrian team members practice in small groups and are only required to attend these sessions once a week in order to compete in shows.


“Practices per week exceeding one time are up to the individual members,” Epright said. “Many of the girls choose to practice more than once to gain time in the saddle and show their diligence. Also, some girls, like Kayla and I, own their own horses at the farm, so we ride all the time.”


The team captains said that even though the riders compete individually in shows, there is a real sense of camaraderie on the team. They carpool to lessons and shows, which gives them plenty of opportunities to bond and support one another. They hold weekly meetings, which range from formal sessions in the Memorial Union, to pasta dinners, to fun group outings like haunted hayrides.


“We’re a very close-knit group,” said Prefontaine of the team. “We all have different riding abilities and personalities, which makes the season very fun.”


The equestrian team competes in about 10 shows throughout the fall and spring semesters. To learn more about the team’s show schedule, please visit http://uriequestrian.webs.com.