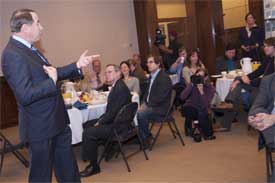 
Dooley referenced the fable of The Tortoise and the Hare. “In the fable the tortoise wins, but we know that is a fable. Slow and steady never wins any race. The hare always wins.”


He said the state, like the nation is no longer the fastest, the most flexible or the most innovative. “Perhaps, even our own democracy itself is too slow to be competitive.


“A coherent strategy from URI on how to help rebuild the state’s economy is absolutely essential,” Dooley said.


As a step in that direction, Dooley announced a concept for a one-stop resource at URI where businesses and agencies in Rhode Island could get assistance in finding interns, connecting with researchers doing work related to their operations or linking with professors in business development and marketing, engineering and environmental management. He envisions that the initiative would begin in the spring.


URI is teaching students skills they need to succeed in the highly volatile economy, is building its research enterprise and is more involved in Providence because it is the economic heart of the state, the president said. He said the state and nation are no longer based on a low-wage industrial economy, and that leaders need to build a knowledge economy that supports workers with high skills who earn high wages. He said the University could be a magnet and a catalyst for research and development.


“For instance the Harrington School (of Communication and Media at URI) is examining a full year for all of its majors in Providence,” he said. “We have partnerships with the Chamber of Commerce, Brown University, Betaspring and many businesses.”


Responding to a question from Providence Journal reporter Jennifer Jordan about what she said is the contrast between Dooley’s emphasis on speed and urgency and Gov. Lincoln D. Chafee’s focus on thoughtfulness and deliberation, Dooley said, “Thoughtfulness and urgency are not incompatible. Just ask a surgeon who must be thoughtful, but also act with urgency.”


Neil Steinberg, the foundation’s president and chief executive officer, who hosted the breakfast at the Foundation’s Providence headquarters, praised Dooley for his efforts to build on URI’s Providence presence.


Dooley also re-emphasized the need for a combined nursing education center in Providence for URI and Rhode Island College, which would also serve as a home for private health care and biomedical companies. He said the goal is to have a private developer build the facility in the Jewelry District. URI and RIC would be the anchor tenant, with other private firms leasing space. The knowledge and ideas developed at the center among our enterprises there could be transferred to the private sector.


“Not only do we not have enough space with our current facilities at URI and RIC to educate enough nurses to meet the upcoming demand, we also need space to encourage business development (in health care and health sciences). We think a developer could use the nursing center as a stimulus to attract businesses.”


Dooley, who opened the breakfast by introducing Naomi Thompson, URI’s new associate vice president for community, equity and diversity, and Dan Hurley, the new men’s basketball coach, said that athletics and diversity issues are often in the news and often not considered connected.


“As a University, our primary aim is to educate all students for excellence,” he said. “And that may not be apparent with our 0-11 football team. We are going to fix that because it’s not worth it if you don’t do it right.”


He said with men’s basketball, the University did just that in hiring Hurley to rebuild the program.


“We went out with the same idea to hire the best possible person as our chief diversity officer,” Dooley said. “We found that person at Northeastern University in Naomi Thompson.”


He said athletics brings a very diverse population to the Kingston campus that otherwise would not be here, including athletes from Scotland, England, Serbia, Finland, and Canada. He said athletics and the efforts of Thompson’s operation are critical in building a vibrant, diverse community.


“Both are primary sources of community,” the president said. “We are building a very desirable location here. The United States does not look like it did 20 years ago.