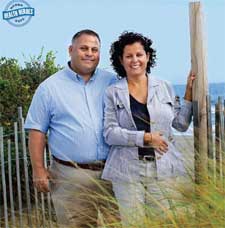 KINGSTON, R.I.—December 19, 2012 — Since epilepsy took the life of their 5-year-old son, Matty Siravo, Richard and Debra Siravo have raised money and awareness through The Matty Fund with the help of local organizations, including the University of Rhode Island. The Matty Fund came to life in 2003 in the basement of their home in Wakefield, R.I.


For all of their efforts, the Siravos were named one of four WebMD Health Heroes in November, which was National Epilepsy Awareness month. They were the first Rhode Islanders to receive the award. The WebMD Health Heroes award celebrates visionary Americans who met a health challenge and gave back to others in an inspiring way, according to the WebMD website. The heroes are featured in the November/December issue of WebMD the Magazine. WebMD is an American corporation that provides health information services. The Siravos were among four WebMD Health Heroes in November. The Siravos and their accomplishments are featured in the January issue of Family Circle magazine.


“Richard and Debra Siravo approached us a little over 5 years ago, looking to engage with URI and bring epilepsy awareness to campus. Since Richard and Debra are URI alumni, they thought it would be great to collaborate with the University,” said Sarah G. Miller, coordinator of the Feinstein Civic Engagement Program. “I organize all of the URI 101 service projects, so I immediately thought of our business URI 101 students. The partnership took off from there. It’s a group effort between the Feinstein Enriching America Program (URI 101 business classes), the College of Business Administration and The Matty Fund.” 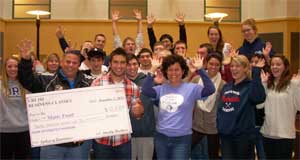 “We have formed a wonderful collaboration with the URI faculty, staff, and students. They have gone above and beyond to raise awareness and support for those with epilepsy in a variety of ways, including through social outlets, like Facebook and Twitter, and through fundraisers conducted by various fraternities and sororities on the Kingston campus,” Richard said.


The URI 101 class has raised epilepsy awareness for the last five years from September to November. Purple is the color associated with epilepsy, so the students have sold purple T-shirts, raising $60,000, according to Miller.


“Every year we have increased the amount of awareness for the URI 101 classes. The past two years we have provided basic seizure first aid lessons and an introduction to the Matty Fund. We then hold a kickoff for the campaign, during which we hear from The Matty Fund, the Siravo family and the College of Business,” said Miller.


In 2004, Matty’s Place, a state-of-the-art special needs playground, was built in the center of Wakefield. URI fraternities and sororities have volunteered there since its establishment. The Matty Fund has also been the chosen charitable organization for Greek Week proceeds.


“It has been great working with the Matty Fund and the Siravo family. Knowledge and awareness not only create the ability to take action and make a difference, but also allow us to be empathic and compassionate to others who might have seizures or a similar challenge. I am very thankful to the Matty Fund and the Siravo family. I think they do powerful and important things in the community and are excellent role models for URI students,” said Miller.


JUMP FOR JOY: The University of Rhode Island 101 business class gives a

$12,000 check to Richard and Debra Siravo- founders of The Matty Fund. Photo