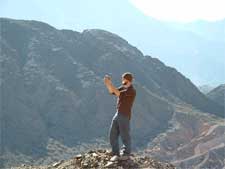 NARRAGANSETT, R.I. – December 5, 2012 – Scientists have long used the speed of seismic waves traveling through the Earth as a means of learning about the geologic structure beneath the Earth’s surface, but the seismic waves they use have typically been generated by earthquakes or man-made explosions. A University of Rhode Island graduate student is using the tiny seismic waves created by ocean waves crashing on shorelines around the world to learn how an underwater plateau was formed 122 million years ago.


“There are any number of ways to create seismic waves, but most people only think about earthquakes and explosions,” said Brian Covellone, a doctoral student at the URI Graduate School of Oceanography. “Using data from ocean waves allows you to sample a different region of the Earth’s interior than you can from using earthquake data. And by combining multiple data sets, you can get a clearer picture of the geology of the Earth.”


Covellone, a native of Warwick, R.I., is investigating the origin of the Ontong Java plateau, an underwater feature north of New Guinea and the Solomon Islands, which formed when a massive volume of magma erupted from the seafloor over a short period of time. Scientists disagree about whether the eruption happened as the result of a plume of magma breaking through the seafloor, in the way that Hawaii was formed, or at a mid-ocean ridge where the Earth’s crust was spreading apart and new crust was forming.


According to Covellone, the velocity of seismic waves depends on the temperature and the composition of the material through which it travels. By studying how quickly seismic waves travel near the Ontong Java plateau, scientists can infer how the structure was formed. By analyzing data from hundreds of seismometers around the Pacific Ocean, especially those between Hawaii and Australia, Covellone believes that coastal waves will help provide the answer.


“Earthquake data stands out compared to the background noise of waves crashing on the shoreline,” he said. “But that noise has valuable information in it. If you take that noise and sum it up over months or years, they grow in amplitude and you can pull out valuable data from it.


“Waves on a beach excite the Earth in a non-random way, and when I stack all that data together, I get a seismogram that looks like an earthquake, with a large spike in it,” he said.


Covellone will present a summary of his research today at a meeting of the American Geophysical Union.


“By the time I graduate, I expect to have a high-resolution image of the velocity structure underneath the Ontong Java plateau,” said Covellone. “And from that we’ll have an idea of what caused the plateau to form. It will shed a lot of light on the subject, but it’s still just one piece of a big puzzle.”