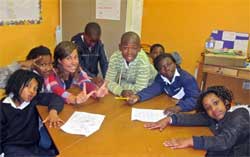 KINGSTON, R.I. – December 12, 2012 – Cumberland native Emma Kilbane has taken advantage of every opportunity to travel and perform community service during her nearly four years enrolled at the University of Rhode Island, from teaching English in South Africa and studying in Spain to building a Habitat for Humanity home for the needy in Alabama.


She will continue down this path when she graduates in May after being accepted by the highly competitive Teach for America program, which recruits high-achievers to teach in public schools in low-income communities around the country. A philosophy major with a minor in nonviolence and peace studies, Kilbane has committed to teaching in an elementary school in South Carolina for the next two years.

“Those serious types of public service have always appealed to me,” said Kilbane, who works in URI’s Feinstein Center for a Hunger-Free America guiding Rhode Islanders through the food stamp application process.


“I was thinking about the Peace Corps or joining the military, but as I became more involved in education I decided on Teach for America. I’m a pretty big nerd myself and I’m passionate about learning, so I think it’ll be awesome to try to ignite that spark in a classroom full of kids. That’s the area I think I can be most effective in,” she said.


Teach for America aims to provide every child in the country with a quality education. It receives nearly 50,000 applications each year but accepts just 11 percent. It has 10,000 corps members teaching 750,000 students this school year. Kilbane is one of the first URI students to be accepted.


“You don’t have to be an education major to participate,” she said. “They accept people who are qualified in their respective disciplines and place them in schools based on need. But I still have to be a certified teacher, so in addition to passing the certification exam, I’ll be spending the summer in Mississippi teaching summer school as part of my training.”


It is not as if Kilbane has no teaching experience, though. As a freshman at URI she volunteered with the Jumpstart program, an early childhood literacy program for underserved pre-schools that works to boost literacy skills among at-risk children. And the summer after her sophomore year she won a teaching fellowship from the Michael Metcalf Memorial Fund to travel to Nomzamo, South Africa, to teach English as a Second Language in a township school.


“South Africa has 11 national languages, and in Nomzamo they speak Xhosa, a clicking language,” Kilbane explained. “In their education system, you have to pass a test proctored in English in order to progress to the next grade, but not much of their schooling is actually taught in English, which obviously poses problems for the students.”


Kilbane had a life-long interest in traveling to Africa, and the fellowship was the perfect opportunity for her to visit the continent while also providing service to a local community.


“The biggest obstacle was trying to communicate with people who don’t speak the same language as you,” she said. “At the beginning of every day I worked one-on-one with students, but each was on a different level so it was hard to adjust from one to the next. Some of the kids weren’t receptive to my efforts at first, but eventually we fell in sync. It probably had something to do with my willingness to sing Hannah Montana and Beyonce with them.”


An honors student at URI and a member of the Dean’s Council for the URI College of Arts and Sciences, Kilbane admits that she has no idea what her future holds after her stint with Teach for America is over.


“I’ve thought about becoming a child advocate or a professor, but I really don’t know what I’ll end up doing,” she said. “I’m not a big fan of tunnel vision because I feel like it closes doors instead of opens them. I want to take these next two years and just see where I end up.”


Photo was submitted by Emma Kilbane