a story written in the mid 14th century. 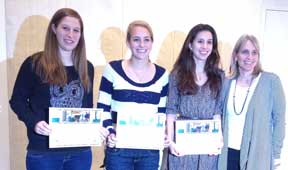 KINGSTON, R.I. – Dec. 3, 2013 – Giovanni Boccaccio is a famous 14th-century Italian writer who wrote The Decameron, a collection of 100 novelle, or short tales about life, love, and death in medieval and ancient times. Now his tales have gone digital for 21st-century readers.


University of Rhode Island Italian language students recently won an award in an international competition in which participants adapted stories from Boccaccio’s masterpiece into diverse media, from embroidered pieces to theatrical presentations to a twitter feed in a rhyming verse form called terza rim a.


The four URI students – Katie Levcowich ’13 of Westerly, Kathleen O’Rourke ’13 of Wakefield, Wendy Searle ’14 of Coventry, and Elizabeth-Ann Viscione ’15 of Richmond – won honorable mention in the “Best Adaptation for Other Media” category in the Boccaccio AfterLife Award, a multimedia event sponsored, in part, by the Italian Consulate General in Boston.


The competition was part of an international celebration of the 700th anniversary of Boccaccio’s birth. Organized by Massimo Riva, professor of Italian at Brown University, the competition was open to the public. Winners came from Australia, Italy and the United States and included students, scholars, and non-academics.


Reading medieval literary works – in Italian, no less – is hard enough. Turning them into digital works is downright daunting. But the URI students were up to the task.


Using iBook Author software, the students created multi-touch iBooks for the iPad. They retold the story using widgets to create an electronic book with videos of themselves in medieval costumes acting out key parts. Their iBook also included audio files, with students reading in Italian. A text version in English also appeared on the screen.


Searle says the biggest challenge was learning how to use the software. After mastering that, it was just a question of telling the story in a coherent and compelling way.


“I think it’s pretty cool what we did,” says Searle. “The iBook doesn’t replace every other method of teaching, but it’s a welcome addition.” She says the electronic book was designed for high school students to use in classrooms.


“We had a really good time,” says Levcowich, who is graduating this month. “It was really enjoyable to take something that’s so old and make it new and fresh.”


“It was great to make the novella come alive with interactive features,” says Viscione. “Technology today is what helps kids understand things. They’re not just staring at a piece of paper. This technology helps them focus on the essential points. It’s captivating.”


Boccaccio was an Italian poet, writer, and scholar who lived from 1313 to 1375. The Decameron, viewed as his masterpiece, became the model for Italian literary prose, and Boccaccio is regarded as a founding father of Italian literature along with Dante Alighieri for epic poetry and Francesco Petrarca for lyric poetry.


The Decameron tells the story of 10 young Florentines who flee to the Tuscan countryside to escape the Black Plague and tell each other stories to distract and amuse themselves. They recount tales that range from sensual and bawdy to philosophical and tragic.


The URI students chose “Federigo degli Alberighi,” a story about a young nobleman who longs for a married woman and finally sees his love reciprocated, though not without great personal sacrifice. A falcon has a major role in the tale.


“The story is about love as a natural force that is so strong no one can resist it,” says Searle. “Federigo couldn’t resist falling in love with Giovanna even though she was married. His generosity makes her realize she’s in love with him as well.”


Reading the story in medieval Italian is no small feat even for native speakers of Italian. It’s like reading Shakespeare’s English today. Patience was required to tackle the text.


The students picked up their award at a daylong celebration Nov. 23 at Brown University. Searle says the event was a great experience. The next step is to try to get the book published. 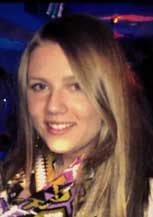 “We know students are very excited about using technology in the classroom,” says Searle. “Anything with an iPad would be guaranteed to hold their attention.”


O’Rourke agrees. “This is a different way to learn. It’s not just sitting down reading a book. Some people learn by doing, some learn by watching, some by listening. I think an iBook incorporates all of that into one resource.”


Catherine Sama, professor of Italian and Film Media at the University of Rhode Island, says she’s proud of her students’ innovative work. “They rose to the challenge of this digital humanities project,” she says. “Their level of engagement was creative and intense.”


She hopes that her students gained confidence in their ability to use technology to learn and teach. “The project also gave my students insight into the magic behind storytelling and a deeper appreciation of Boccaccio’s masterful interpretation of the human condition.”


Left to right, Katie Levcowich ’13 of Westerly, Wendy Searle ’14 of Coventry, Elizabeth-Ann Viscione ’15 of Richmond, and Catherine Sama, professor of Italian and Film Media at the University of Rhode Island. Photo courtesy of Katie Levcowich.