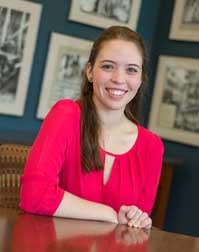 KINGSTON, R.I. – December 4, 2014 — Morgan Breene grew up caring for show cows and chickens in West Greenwich R.I. But her studies and discoveries far beyond the fences of her family farm have made Breene the University of Rhode Island’s first Marshall Scholar, the University announced today.


Breene (’14) is one of 31 American winners of the award this year and the only Marshall Scholar from Rhode Island. She is one of four winners in the New England region out of 116 applicants and the only recipient from a public institution in New England. The award provides two years of funding for scholars to study in the United Kingdom. Breene will use her award to pursue a master’s degree in maritime archaeology at the University of Southampton and another master’s in European history at University College London.


“From her early years growing up on a farm to her internationally recognized excellence, Morgan embodies everything the University of Rhode Island has stood for since its founding as the state’s land grant university,” said URI President David M. Dooley. “Her scholarship, combining historical and archaeological discovery, has placed her in truly exclusive company with this award and, in turn, she has become a part of the University’s own history.”


The scholarship is so prestigious that students must be nominated by their institutions, ensuring that all applications received for this award represent high achieving young scholars from across the United States.


“We are delighted to have Ms. Morgan Breene joining the 60-year tradition of Marshall Scholars,” British Consul General Susie Kitchens said. “As future leaders, with a lasting understanding of British society, Marshall Scholars strengthen the enduring relationship between the British and American peoples, their governments and their institutions. Marshall Scholars are talented, independent and wide-ranging, and their time as Scholars enhances their intellectual and personal growth. Their direct engagement with Britain through academic programs contributes to their ultimate personal success.”


Breene had successfully applied for multiple grants and won several selective awards as an undergraduate, including a grant from the URI Undergraduate Research Initiative to conduct archival research in London about nineteenth-century sea battles in the Mediterranean. Those experiences boosted her confidence in herself and her work. Still, after completing the process for the Marshall Scholarship, she believed winning was a long shot.


“I was over the moon when they called me. I was so excited just to get to the finalist stage and have the opportunity to be interviewed in Boston. When it was over, I wasn’t sure I had done enough,” Breene said. “It caught me off guard when they called to tell me I won it. I was jumping all over the living room.”


The phone call was the culmination of years of hard work as a history and anthropology major at URI, during which Breene also trained to an advanced level as a scientific diver. Her first experience with underwater archaeology, during URI’s excavations at the ancient port of Akko in Israel, under the direction of associate professor Bridget Buxton, led to important new discoveries from the era of the Napoleonic wars.


The University’s Honors Program helped prepare Breene for the rigorous application process. A self-described introvert, Breene worked diligently preparing for and practicing mock interviews with 10 professors to make sure she was fully comfortable when it was time to speak with the interview committee in the Consul General’s Boston residence.


“This is a huge honor and it was a major time commitment not only on my part, but on the part of the Honors Program as well,” Breene said. “Knowing that they saw something in me and took this on to help me prepare, it feels good to make that effort pay off.”


Kathleen Maher, URI assistant director for National Fellowships, University Honors Program, said Breene’s hard work is a great illustration of what can be achieved at a public university.


“Morgan is a shining example of our culture of achievement at the University,” Maher said. “She pursued a great range of academic opportunities available here, from field work to independent research to study abroad, which helped her stand out among the best young scholars from around the nation.”


Breene completed the University Honors Program and graduated summa cum laude in May. She was the recipient of the Academic Excellence award for her major in anthropology and the Metz Prize for Outstanding Achievement in history, as well as the URI Undergraduate Research Excellence Award in the Social Sciences, Arts and Humanities and the URI Center for the Humanities 20th Anniversary Prize for Undergraduate Research. She is pursuing a graduate certificate at URI in geographic information systems and remote sensing, and serves as a research assistant to history and underwater archaeology professor Rod Mather on a National Park Service project.


Mather, who worked with Breene studying underwater archaeological sites off the coast of Bermuda, hired her immediately upon her graduation, something he hasn’t done with an undergraduate student in 20 years. He said she was a perfect candidate for the award.


“Obviously, she’s highly intelligent, but she’s also creative in her thinking and she’s very determined to get to the bottom of whatever she’s investigating,” he said.


Her determination and desire to explore the connection between people’s history and the sea are what drive Breene’s career goals. She aspires to protect submerged cultural heritage sites by educating and engaging the public on the importance and excitement of underwater archaeology. Continuing her studies in the U.K. will help enhance her understanding of New England’s coastal heritage.


“I like people. I like to know why we do what we do, how we got to the present,” she said. “And I like to tell stories. What can a shipwreck tell you about the past? The coastal waters of New England are important to our identities as Americans, but the colonial history of the coast cannot be understood without understanding the corresponding social climate in England. The major archaeological finds of the next 100 years are going to be found underwater.”


Breene is URI’s first student to win a Marshall Scholarship, but she is not alone on campus in representing the program. Cheryl Foster, associate director of honors and professor of philosophy, was a Marshall Scholar at the University of Edinburgh and completed her doctorate there in 1992. She was among the many faculty who helped Breene during her application process.


“Morgan will flourish in the British system of higher education,” said Foster, “a system that prizes creativity, independence and innovation. Her area of research in maritime history has important implications for how we understand the value of submerged cultural history.”