Skip to content
KINGSTON, R.I. – December 12, 2014 – Three undergraduate students studying chemical engineering at the University of Rhode Island have won awards for their research at the 2014 student conference of the American Institute of Chemical Engineers.


The awards were presented last month at the meeting in Atlanta. 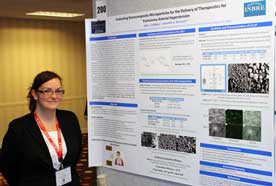 
“These three students put in a great deal of work on their research and they really earned these awards,” said Bothun. “Presenting at a large international conference was an excellent opportunity for them to grow personally and professionally, and we expect great things from them in the future. Their achievements showcase the cutting-edge research that is being conducted by the undergraduates in our department and our commitment to mentoring them.”


Cuddigan’s award-winning research focused on the development of a new pharmaceutical intended for the treatment of pulmonary arterial hypertension, an incurable and life threatening disease characterized by abnormally high blood pressure in the arteries leading from the heart to the lungs. 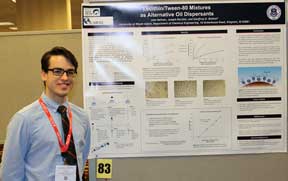 “The goal of our research is to develop and evaluate dry powder aerosols to be delivered directly to the lungs and surrounding arteries,” said Cuddigan, who is enrolled in URI’s International Engineering Program and hopes to eventually work as an engineer in Germany. “My project involved synthesizing this new pharmaceutical and characterizing it by size, morphology, and drug loading to see if our system is appropriate for inhalation therapy.”


Neilsen won for his research on environmentally-friendly methods of dispersing oil in the event of an oil spill. The dispersants used to clean up the Deepwater Horizon oil spill in 2010 were very effective but were also toxic and may have caused more harm than good. 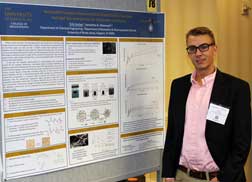 
Hurley’s research examined the use of nanomaterials as a filter for use in industrial wastewater treatment. He incorporated nanomaterials like graphene oxide and carbon nanotubes into a hydrogel matrix to maximize the surface area of the nanomaterials to provide the best adsorption capacity.


“In the future I hope to end up in the biofuels industry helping bring more carbon neutral fuels to the market,” he said. “I am also considering going to graduate school to study the fluidization of particles.”