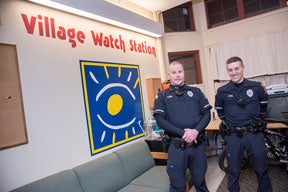 KINGSTON, R.I. – November 6, 2015 – If you find yourself in Barlow Circle some evening, you might see students or resident assistants from the three freshman residence halls clustered there strolling in and out of the small police substation or chatting with officers on bicycles. The atmosphere is relaxed and congenial, and that’s the idea.

Students, Housing and Residential Life personnel and officers are feeling the positive effects of two new components of the University of Rhode Island’s community policing program. The program seeks to build trust among officers, students and housing staff on a daily basis, so when a crisis arises all parties can work together. The program now includes two officers stationed at the Freshman Village, Barlow Watch police substation five nights a week and a rejuvenated bicycle patrol. 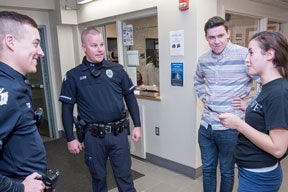 Both components allow officers to connect with students on a personal level, opening lines of communication.

“Now they can see our personalities, instead of just the uniform,” said Officer Michael McCabe, who is one of two officers stationed at Barlow from 8:30 p.m. to 4 a.m. Tuesday through Saturday.

“We get a ‘Hey, how are you?’ from every group of students we pass when we’re on the bikes,” added Officer Nicholas DeTroia who is also stationed in Barlow. “We’re young, we’re proactive and we want to be here.”

Lauren Sperry, a freshman Weldin Hall resident said the officers’ presence in Barlow Watch is a comfort to her. “I just feel safer with them around. I feel like nothing’s going to happen with them there.”

The officer’s open-door policy in the Barlow police substation allows community members to communicate with them more frequently and openly. This allows officers to file better reports and deal with issues more effectively. “RAs and hall directors walk in here all the time to talk,” said McCabe. “They’ll tell us about an issue the first time it happens, so that when it happens the third time and we need to file a report, we already know it’s been an issue.”

He continued by saying that the open door policy at Barlow Watch makes students feel welcome, too. “We’ve had students come in just to ask questions. We had one student who had an issue in her dorm. She came right in here and sat down on the couch and was able to discuss the issue with us. That level of interaction is so important.”

URI Police Major Michael Jagoda is grateful to the officers for the hard work they have put in to making the community feel safe. “I have received numerous complimentary comments from staff, faculty and students about both of these officers’ professionalism, partnership and service to the entire URI community. This is a true mark that they take their professional obligations very seriously and value our partnership with the URI community.”

“The officers are very good at what they do,” said Lt. Rich Moniz, who can be found popping in and out of Barlow. “Trust comes with time and getting to know students and their families. Being out of the cruisers and in Barlow Watch allows officers to build that trust.”

Trust makes students and HRL staff more comfortable seeing officers out and about on campus, which further opens communication between the officers and the community they serve.

Megan Girmaiy, who is the hall director of Gorham Hall, another freshman residence hall, said, “I think it’s a great program, they’ve all been very friendly and have been interacting with everyone. I think it’s going really well.”

John Sears, assistant vice president of Student Affairs and director of Housing and Residential Life at URI, said that stationing officers in Barlow is an example of the collaboration and support between the two departments. “From our perspective, our relationship with the police department is a very important one. A close working relationship between housing and the police department ultimately results in good things for our student residents.

“HRL staff completes training with the officers in August. We discuss our joint initiatives and goals, but ultimately the purpose is to get our staff to have face time with the officers. When you’re responding to a crisis in a residence hall the stakes are high, and the situation goes much better if you’ve already met the officer you’re working with,” he said. “They know each other by face and name.”

Emma Clarke, an intern in the URI Department of Marketing and Communications and a public relations and French double major, wrote this release.