Skip to content
CCRI grad enjoys being a ‘geology detective’ 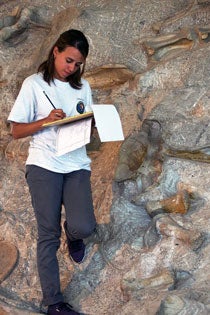 KINGSTON, R.I. – November 25, 2015 – Cranston resident Marie Jimenez is aiming for a career as a paleontologist, and the aspirations of the University of Rhode Island senior received a big boost last summer when she served as an intern at Dinosaur National Monument in northeast Utah. And yet she says she has very little interest in studying dinosaurs.


Unlike many paleontologists, Jimenez said she “was definitely not into dinosaurs as a kid.” In fact, she initially enrolled at URI to study engineering after transferring from the Community College of Rhode Island. But a course in geology redirected her academic studies, which led to her interest in paleontology.


“Paleontology is all about uncovering the history of the Earth, whether by dinosaur fossils or other types of fossils,” she explained. “You have to know a little about everything to attack a problem. It’s sort of like being a geology detective.”


Her internship at Dinosaur National Monument, arranged through the Geological Society of America and the National Park Service, was aimed at helping make the work of the park paleontologist a little easier. The 180,000-acre unit of the Park Service centers around what Jimenez called “a vertical dinosaur quarry” where the fossil beds are tilted at a 67-degree angle.


“So instead of looking down into the ground at the fossils, you’re seeing this 150-foot wall of bones in front of you,” she said.


Every day for 11 weeks, Jimenez worked to digitize archival documents, photographs and maps from the early days of the 100-year-old fossil quarry to make the history of the site come alive. She searched through boxes of archival materials, unearthed hidden specimens, and scanned and wrote a description of each item. Her work was part of the Digital Quarry Project, which now can be seen by anyone visiting a new website that launched last month at carnegiequarry.com.


“I spent most of my time in the Paleo Library where we would pick a box, search through it and find these amazing stories about people or specimens we discovered,” Jimenez said.


Although excavations at Dinosaur National Monument ended in the 1990s, Jimenez was still able to occasionally engage in fieldwork mapping parts of the park and measuring and photographing bones in the quarry.


“My favorite part of the experience was being able to explore the area,” she said. “As long as we got our work done, we could explore the park and volunteer for other park-related jobs. I went on a six-day rafting trip with the park biologist to extract invasive species. It was hard work, but six days in the wilderness without a shower or a cell phone was a great experience.”


As she looks toward graduation next May, Jimenez knows her college education is far from finished. She plans to attend graduate school with the aim of becoming a working paleontologist in a museum, park or academia.


Pictured above: URI senior Marie Jimenez takes notes at the wall of bones as part of her internship at Dinosaur National Monument in Utah. (Photo courtesy of Marie Jimenez)