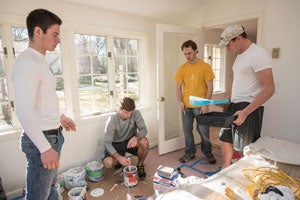 KINGSTON, R.I. – December 10, 2015 – The men’s rowing team’s annual Workathon fundraiser is in full swing once again. Each year the club team offers helping hands to URI faculty and staff, performing odd jobs in order to raise money for the team.


“The money we raise goes a long way,” said Cody McMillian, a senior from Portsmouth, R.I., this year’s team captain and the organizer of the fundraiser for the last two years. “The money pays for our trip to nationals and any trips we do in the spring. It prevents team members from having to pay for things like transportation and hotels out-of-pocket.”


“They usually bring in a few thousand dollars,” said Chris Daigle, URI’s coordinator of club sports. “This year they expect to make between $4,500 and $5,000.” 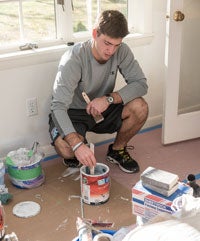 Each year, fliers are distributed to all faculty and staff at URI, who can email the team and specify what kind of work they need done, how long it’ll take, and how many workers they’ll need. The student coordinator then schedules jobs, usually on weekends, and assigns team members to complete them.


“We do a lot of raking, weeding and cleaning leaves out of gutters,” said Carl Neff, a sophomore from Exeter, R.I. and this year’s fundraiser coordinator. “Last year we built a deck for someone—that was a pretty long day!”


“It’s rewarding talking to people in the community,” said McMillian. “I have a good time with it.”


“This is a fundraiser the team has done for many, many years,” said Daigle. “It’s one of their big fundraisers they do every fall.” According to Daigle, the fundraiser continues through the spring, as well, with team members doing spring clean ups in basements or yards, or putting docks back in the water for the warmer months.


“I actually hired them once to help me move my kids’ swing set when we were moving,” Daigle added. “They helped me move all the pieces into the backyard and spread the mulch around it.”


McMillian and Neff both said the time commitment required by the fundraiser is challenging, but worth it. “It’s necessary for our team to run,” said McMillian. 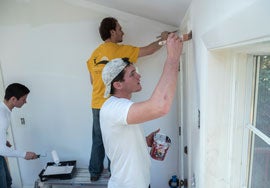 The spring trips that the team takes to competitions each year gives members plenty to look forward to when training indoors during the fall and winter. The team recently wrapped up the fall on-water portion of their training with an alumni race, during which team members and alumni combined and raced each other. Now they are transitioning to indoor workouts, which include cardio and strength training.


The team participates in some regional and national races in the fall to give their new members something to train for, instead of having to wait until the spring. The team’s fall racing season went very well, with the varsity 4-person boat taking 8th out of 53 boats at the Head of the Charles Regatta in Massachusetts. Last spring the varsity 4 won the New England championships, making the four, which includes McMillian and Neff, the best boat in New England. The team’s lightweight double also made URI history as the first boat to bring home the gold at the Head of the Charles Regatta, one of the most prestigious rowing events in the world.


Bob Gillette, the team’s coach, started the fundraiser at URI in 1981 as a way to raise money for the team, but soon found that the fundraiser did much more than that. “It became apparent that it was a way to develop a good image on campus,” he said. The relationships between faculty and staff and rowers that developed as a result of the fundraiser helped to garner tangible support for the team at the time. It also builds character in the individuals, and solidarity for the group. It has a lot of peripheral benefit to the team.”


He added, “We’re trying to let people know that we’re not just out there with our hands out—we’re willing to do whatever it takes to succeed. We’re a very resourceful group,” he said. “And the money helps, too. It’s a very expensive sport.”

Grady Bolan, sophomore, mixes paint for a fresh coat in a client’s home.

Painting is under way at a fundraiser job site.