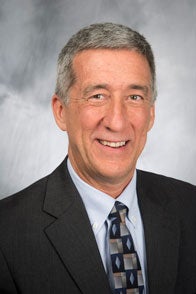 KINGSTON, R.I. – December 8, 2015 – The University of Rhode Island has named a respected professor, epidemiologist, and health policy and economics analyst dean of its College of Pharmacy.


Saunderstown resident E. Paul Larrat, who has served as interim dean of the College since February 2013, is also a professor of pharmacy practice and an alumnus of the University. Larrat earned a doctorate in epidemiology from Brown University. He also earned a master’s degree in pharmacy administration, a master of business administration degree, and a bachelor’s degree in pharmacy, all from URI.


Under his leadership, students earning the six-year doctor of pharmacy degree achieved a 99 percent pass rate on the North American Pharmacist Licensure Examination, according to a 2014 report by the National Association of Boards of Pharmacy and a pharmacy employment rate at graduation of 97 percent. The College is also among the top 20 colleges of pharmacy in terms of federal research funding and the top 10 in placement of graduates in postdoctoral residencies.


“The appointment of Dr. Larrat as permanent dean follows his very successful service as interim dean, which was marked by effective leadership, innovation, and substantial advancements in the College as well as growing faculty, staff and administrative support,” said Provost and Vice President for Academic Affairs Donald H. DeHayes. “Faculty, staff, advisory council members and many partners have recognized his efforts to propel the College forward.”


“The University is in the midst of major initiatives to enhance internal and external collaboration in the health disciplines,” Larrat said. “I am excited to be involved in the leadership of those efforts and look forward to playing a major role in those developments. Of course, I am very proud as a URI alumnus to be leading the College of Pharmacy on a permanent basis. Since its creation, the College has been an international leader in pharmacy education and research. As a graduate of the College, I have been fortunate to be part of its growth and success through several decades.”


Among Larrat’s major accomplishments is an initiative involving URI’s College of Pharmacy and the Rhode Island Department of Corrections that has saved the correctional system about $19 million in prescription costs since 2001.


The Pharmacy Benefit Management Institute presented a 2009 Rx Benefit Award to URI and the Department of Corrections for its new Collaborative Management Model, which was the first time the institute honored a collaboration involving a university or college and a state agency.


In 2004, he was named a NASA Fellow and spent several months at the Kennedy Space Center assisting in life sciences research projects focusing on volatile organic compound production during extended space travel. From 2010 through 2011, he served as a Congressional Health Policy Fellow in the U.S. Senate, where he engaged in developing health care and aging legislation and policy in the office of Finance Committee Chair Sen. Ron Wyden (D-Oregon).


A former associate dean for pharmacy research, he played a key role in the College’s move in 2012 from its former home in Fogarty Hall to its new, $75 million, 144,000-square-foot building in the North Sciences District of the Kingston Campus.