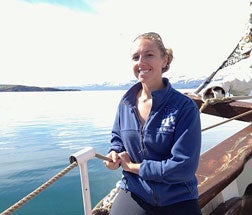 NARRAGANSETT, R.I. – December 8, 2015 — Zoe Gentes, a San Diego native who earned two degrees in geological oceanography from the University of Rhode Island, has been named a John A. Knauss Marine Policy Fellow, enabling her to spend a year working on ocean policy issues in Washington, D.C., next year.


Gentes is among 55 students from across the country selected for the $56,000 fellowship. She applied through Rhode Island Sea Grant, which administers the program locally and nominates candidates for consideration by the National Sea Grant College Program.


For her fellowship, which begins Feb. 1, Gentes will serve as a marine science advisor to Congressman Sam Farr of California. The co-founder of the House Oceans Caucus, he was one of the legislators with whom Gentes most wanted to work.


“He’s the oceans guy in Congress, and his staff really seemed to like my background, so everything worked out,” she said. “I’m very excited to be a staffer to advise Congressman Farr on ocean policy, which might involve briefing him before he makes speeches and giving him talking points. I also hope to work a bit with Monterey Bay Aquarium, which is in his district. I’m mostly there to learn how the policy process works and help however I can.”


Gentes fell in love with marine geology her senior year in high school and was awarded an academic scholarship to URI, where she also competed on the varsity rowing team. After earning a bachelor’s degree, she worked in the Whale Acoustics Laboratory at Scripps Institution of Oceanography in her hometown before returning to URI to earn a master’s degree at the Graduate School of Oceanography. She graduates this month.


“We know less about the ocean floor than we do about the surface of the moon,” Gentes said. “I’m really interested in plate tectonics and mid-ocean ridges and oceanography in general.”


Her master’s thesis examined the geochemistry deep below an underwater volcano in the South Pacific. “I investigated the chemical and geological processes that are happening beneath the volcano along a subducting plate boundary,” she explained. “Just by analyzing the geochemical signatures of basalt collected at the surface, we can make inferences about the mantle wedge, and from there you can guess what the processes might be at depth.”


During her years of study at URI, Gentes was also interested in writing. She earned an undergraduate minor in writing and rhetoric, served as a science communications intern at Rhode Island Sea Grant, and as a graduate student she wrote for Oceanbites, a marine science blog based at the Graduate School of Oceanography that aims to make oceanographic research accessible to non-scientists. These experiences led her to pursue the Knauss Fellowship.


“I was trying to figure out my next steps,” said Gentes, who has served as a science communications fellow for an office of the Geological Society of America since defending her thesis last June. “I enjoy science writing and informing people what’s going on in the scientific world, but I wanted to make more of a difference by being close to someone who is making influential decisions.”


Looking to her future, Gentes said she is keeping her options open. “I’d like to continue to do science writing and make a difference somehow. Whether it’s in policy or another medium, we’ll just have to wait and see.”


The National Oceanic and Atmospheric Administration’s John A. Knauss Marine Policy Fellowship, established in 1979, matches qualified graduate students interested in ocean, coastal, and Great Lakes resources and the national policy decisions affecting those resources with hosts in the federal legislative or executive branches of government. The fellowship is named for the former dean of the URI Graduate School of Oceanography who also served as NOAA administrator.