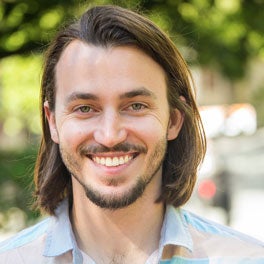 KINGSTON, R.I. – December 28, 2015 – Kyle Nacci did not have a smooth start to his college career. The University of Rhode Island senior psychology major attended Lehigh University on and off for several years before transferring to URI in the spring of 2014. He was frustrated with the constraints in higher education that made it difficult for him and his fellow students to discover their strongest interests.


“I became very interested in educational reform with the goal of helping people find their passions,” said Nacci, who grew up in Cranston and now splits his time between Warwick and Providence.


That interest led him to found a student organization called Big Thinkers, which was inspired by URI’s branding tagline, “Think Big. We Do.” The group was divided into 10 committees, each focusing on a different social action like educational innovation or international hunger alleviation. The weekly meetings of each of these committees made Big Thinkers the most active student organization at URI last spring. Now called Thrive Academy (thriveacademy.co), the group’s focus has shifted to helping students discover their life’s purpose. Members can choose from eight projects to work on—from a social network that connects people by their interests to a festival for fostering innovation.


“People think that changing the world is such a ridiculous ambition. They think you have to be crazy to believe you can do it,” Nacci said. “This is an organization where it’s OK to believe that; we’ll embrace that level of craziness. But if you focus on changing individual lives, you can see the immediate effects of your actions.”


It was there in his own organization that he found his own purpose: helping others to thrive.


His efforts resulted in his receiving Social Entrepreneurship Greenhouse’s Changemaker Fellowship, which is awarded to one student at each of the 11 Rhode Island universities and colleges. The fellowship supports entrepreneurial students in their own projects, and encourages them to provide support for other students on their campuses.


“A lot of people aren’t interested in entrepreneurship because they think they are just about making money. I want to show people that entrepreneurship is a tool for solving problems and helping people,” Nacci explained.


Many of Nacci’s cohort members reported that their schools did not have entrepreneurship groups, so he offered them an idea: “Instead of starting your own entrepreneurship club,” he asked, “why not take what I’ve created here at URI and bring it to your campus?”


Nacci is helping students at eight colleges and universities create their own Thrive Academy chapters.


Thrive Academy is important because of the community it provides its members. “I believe that when you connect with other people who share your passions, you can work together, and that’s so much more powerful than going it alone,” Nacci explained. “I’ve been an advocate for positive psychology for a while, but it wasn’t until I had a community of people to work with that I started achieving things.”


Nacci is proud of his group’s success. He cites his first meeting with Big Thinkers as his proudest moment at URI. “I wasn’t even sure if anyone would show up,” he remembered. “Being in that meeting and seeing all these new people coming together, I remember thinking that they could have been anywhere else, doing anything else. But they wanted to be there because they cared about making a positive impact—that’s what’s driven me throughout the year.”