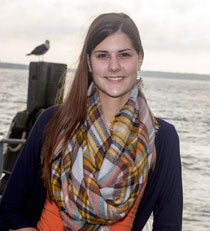 NARRAGANSETT, R.I. – December 17, 2015 – Several surprising research papers have been published in recent years claiming to have discovered nearly 100 varieties of fungi in seafloor sediments up to 1,740 meters deep. While some fungi are known to live in marine environments, especially on corals and seaweeds, most of the fungi found in the sediments were species not known to inhabit the ocean.


Enter University of Rhode Island senior Victoria Fulfer, a microbiology major from Carlisle, Pa., intent on a career in medical research. She took a job in a lab at the URI Graduate School of Oceanography last year and was encouraged by Professor Steven D’Hondt, an expert on subseafloor life, to investigate the validity of the fungi findings.


Fulfer investigated the six research papers and noted the genus or species of each variety of fungi mentioned, then determined the habitat where each is typically found. Most were not native to marine habitats but were instead species that grow on human skin, in human-created indoor environments, or on terrestrial plants or soils. In one paper, 57 percent of the fungi mentioned were associated with human environments.


“I’m the first person to formally question the findings in these papers, so it’s a bit controversial,” said Fulfer. “But it’s definitely a concern that so many of the fungi have this human association. It makes us think that it could be that the samples collected for those papers were contaminated. It highlights the need for better quality control when collecting and handling the samples.”


Fulfer’s research is being presented this week at the fall meeting of the American Geophysical Union (AGU) in San Francisco. The conference is the largest gathering of earth, ocean and space scientists in the world.


The URI undergraduate said that it has only been a few years since the deepest claims of bacteria living in sediments were published, which raised the question about whether other types of organisms could live there as well. She said it is certainly conceivable that some fungi could survive in shallow sediments, though she thinks it would more likely be fungal spores rather than the mature organism.


“The fact that we found human associated fungi to be fairly ubiquitous in both deep and shallow sediments was another red flag for us,” she said.


Fulfer is in the process of writing a research paper about her findings that she plans to submit to a peer-reviewed scientific journal. If accepted, it would be her first research publication.


Her experience working in an oceanographic research lab has Fulfer rethinking her career objective.


“I started out knowing nothing about oceanography, and here I am two years later applying to grad school in oceanography,” she said. “I like the interdisciplinary aspect of oceanography. Combining geology, physics, biology and chemistry has been interesting. There are a lot of avenues I could take.”


She hasn’t entirely ruled out earning a doctorate in immunology to become a medical researcher, however.


“I’m hoping my experience at AGU will guide me in my decision,” Fulfer said. “I hope to meet people who could be potential advisors and open my eyes to see whether oceanography is where my passion lies.”