Skip to content
Students, faculty, staff and retirees attend event in his honor 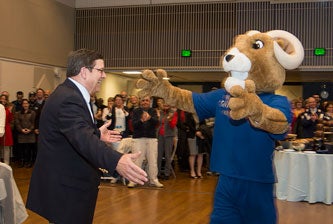 KINGSTON, R.I. – December 21, 2015 – Tom Dougan looked out on the 300 or so who gathered this week to honor and congratulate him on his retirement from the University of Rhode Island and pronounced it amazing.


But the crowd in the Memorial Union Ballroom wasn’t that amazing. Not when one considers the tens of thousands of students, hundreds of administrators, faculty and staff he has supported, worked with and cheered on during his 30 years at URI. It wasn’t that astonishing to see retirees, alumni, family and friends lining up to say goodbye to Thomas R. Dougan, vice president of Student Affairs.


He praised those in attendance for all they do for students, particularly members of his staff who work day in and day out to help them. “Some might say we do our best work at night,” Dougan said to knowing smiles and soft laughter. “As good as all of you are, our students are even better.” 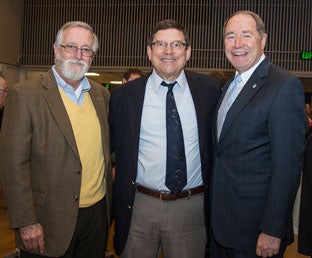 Then, he paused, and welled up for a moment.


“Finally, I want to thank my family, my wife Karen, my son Brian and daughters Kate and Jennifer. Without Karen’s and my kids’ loving support and understanding, none of this would have been possible,” said Dougan, whose retirement takes effect Jan. 8, 2016.


Rep. Raymond Gallison, chair of the Finance Committee of the Rhode Island House of Representatives, and Rep. Kathleen Fogarty read citations and then presented them to Dougan. Dooley read a citation from Providence Mayor Jorge Elorza, a URI alumnus.


And if that weren’t enough, fraternity and sorority members honored Dougan and his longstanding service to students by asking him to select his favorite charity as the recipient of the proceeds from this year’s Philanthropy Week program, the Greek system’s top fundraiser. What did Dougan do? He asked that the $20,250 be donated to the Horace J. “Harry” Amaral Scholarship Fund, in honor of URI’s late director of Enrollment Services and one of Dougan’s closest friends.


During the retirement festivities, Dooley said, “this wonderful turnout shows the respect, admiration and affection we all have for you.”


Cody Anderson, the finance committee chairman for the Student Senate, said the celebration was a great way to thank Tom for his dedication to students.


“He has always gone above and beyond to help students in their growth and development,” Anderson said. “On behalf of the Student Senate and the entire student body, I say thank you. You will always have a home here, and you will be missed.”


In his summertime statement announcing Dougan’s retirement, Dooley said that the vice president has been on-call 24/7 throughout his 30 years of service to the University as he has transformed the Division of Student Affairs.


“Everyone knows that when there is an issue with students, Tom is the one to call at any hour of the night or day. He has held the hands of students in the hospital, offered a reassuring touch to anxious parents and provided a steady hand to the community at large when it has dealt with tragedy. Who hasn’t felt better after Tom offered his heartfelt, ‘Keep the Faith’?” 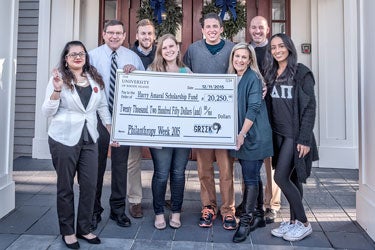 When he came from the University of Florida to URI in 1985 as the University’s new dean of students, he was already a national expert on fraternity and sorority affairs. He used that experience to turn URI’s moribund Greek system into one that wins national awards for service and which is again playing a strong role in the positive life of the University. He then served as interim executive officer for student affairs before becoming assistant vice president in 1988. He also served as interim director of athletics for a period.


“To the sounds of resounding applause from his staff in the Memorial Union, Housing and Residential Life, Dining Services, and indeed from around the campus, Tom was named vice president for Student Affairs in 2001,” Dooley said. “He quickly got to work on some of the University’s more pressing problems, including student behavior on and off campus.”


He was an original member of a campus-wide committee to change behavior relating to alcohol and substance abuse, working closely with faculty and staff to strengthen alcohol and substance prevention programs and sanctions against students who violated University policies. Around the same time, he became the founding chair of the URI-Narragansett Coalition to develop programs to improve relations between student renters and year-round residents.


Dougan has been at the helm as the University has made tremendous strides in its housing and dining operations, with a majority of the housing stock either new or recently renovated and our students about to enter a golden age of dining, with the renovated and expanded Butterfield Dining Hall, which opened this fall, and the award-winning Hope Commons, which has received numerous national awards since its opening. He has also been a driving force in efforts to make URI a welcoming community for all, including the LGBTQ community.


“No one was happier than Tom when we opened our Gender and Sexuality Center this year,” Dooley said.

HONORING HIS SERVICE: Members of URI’s fraternity and sorority community honor retiring Vice President for Student Affairs Thomas R. Dougan by asking him to choose the charity of his choice to receive $20,250 from this year’s Philanthropy Week. He chose the Harry Amaral Scholarship Fund in memory of his dear, late friend. From left are student Raquel Mendes, president of the Multicultural Greek Council; Dougan, students Daniel Reagan, president of the Interfraternity Council, Sarah Marchand, vice president of programming for the Panhellenic Council, and Andrew “Ozzy” Osmanski, director of service and involvement for the Interfratenity Council, Bernadine Sadwin, director of Annual Giving for the URI Foundation; Stephen J. Simo, director of Greek Affairs and student Tatyana Liete, president of the URI Panhellenic Council. URI Photo by Michael Salerno photography.