KINGSTON, R.I. — March 5, 2019 — The fifth annual D.I.V.E. RI (Diversifying Individuals Via Education) Conference will be held Friday, March 22 and Saturday, March 23 at the University Rhode Island’s Kingston campus. The theme for this year’s conference is “Moving Towards Authenticity,” focusing on the importance of remaining true to one’s identity.

The fifth annual student-led conference, which seeks to educate individuals about relevant issues surrounding racial and ethnic topics while enhancing student leadership and social change on college campuses, will feature actor, producer and singer/songwriter Bryan Terrell Clark as keynote speaker on March 23. Clark, who originated the role of Marvin Gaye in “Motown: The Musical” on Broadway, has gone on to appear in film and television in such shows as “Empire,” “The New Edition Story” and “Blue Bloods,” as well as starring as George Washington in the Broadway juggernaut “Hamilton.”

In 2017, Clark founded InDEFINED, an online, philanthropic clothing brand, with partner, Robert Raeder. The project was initially conceived to help bring arts education to youth in New York City and evolved into a brand that would help the pair deliver an empowering message about living free of labels.

“Aside from Mr. Clark’s success on stage and screen, as a group we were particularly impressed with the work that he has done in launching his clothing brand and the message and mission behind that project,” said Baizat Ibrahim, a senior majoring in cell and molecular biology from Woonsocket, R.I. Ibrahim has been involved with D.I.V.E. RI for three years, including two years as a committee member and this year as logistics chair for the conference. She said, “Living to your fullest potential, being true to yourself and refusing to be defined by constrictive labels really speaks to the theme of this year’s conference.” 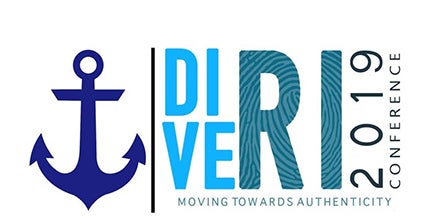 The purpose of the D.I.V.E. RI Conference is to foster a space where students are free to learn about diversity and the challenges faced by others regardless of age, sex, race, ethnicity, gender, religion or ability. The weekend will include a series of discussions, workshops, speakers and networking. Attendees should expect to leave the conference with enhanced leadership capabilities and connections to other student leaders on the URI campus and other local colleges and universities.

Last year’s D.I.V.E. RI Conference featured speakers from across the country and drew close to 300 student attendees from colleges and universities across Rhode Island, as well as Connecticut and Massachusetts.

For more information, visit D.I.V.E. RI. The conference costs $25 for students and $30 for the general public. Tickets purchased prior to March 8 will be discounted $5. Tickets cover the cost of meals and refreshments for the two-day conference and can be purchased through eventbrite.