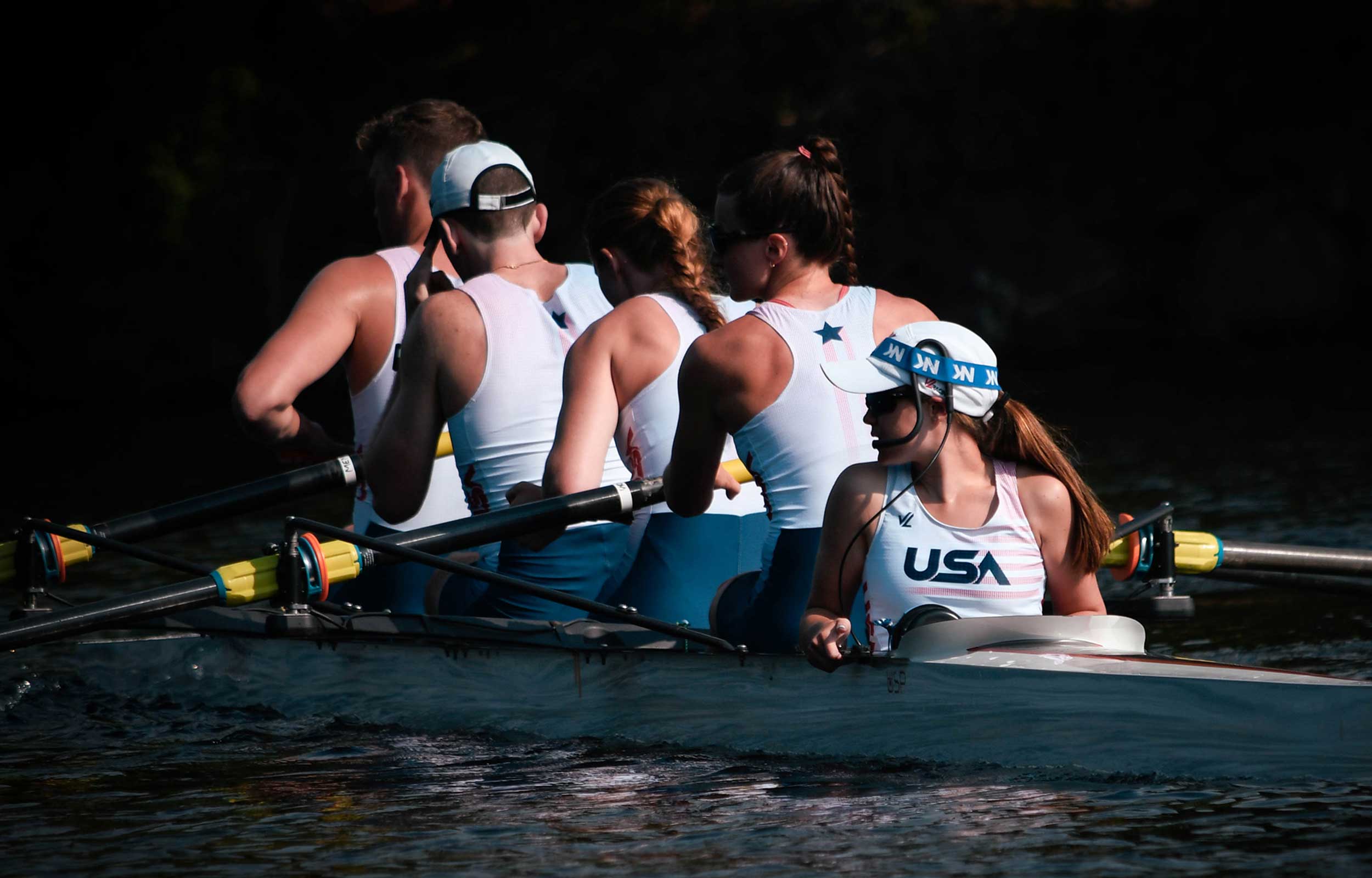 University of Rhode Island rowing coach Shelagh Donohoe and alumni Allie Reilly and Karen Petrik led the U.S. PR3 mixed four with coxswain to the silver medal Sunday morning at the 2020 Paralympic Games in Tokyo. They covered the 2,000-meter course in 7 minutes, 20.13 seconds, about 11 seconds behind Great Britain in first. France took the bronze with a time of 7:27:04. It was Reilly’s third silver in the event in international competition and Petrik’s second.

When Allie Reilly walked on to the URI rowing team as a novice six years ago, she had two mentors who introduced her to the sport—Coach Shelagh Donohue and fellow first-year student Karen Petrik.

So, it’s especially fitting that the trio are sharing the bright lights of international competition as part of the USA Rowing Team at the 2020 Paralympic Games, which began on Aug. 24 in Tokyo. Reilly and Petrik are members of the PR3 Mixed Four with Coxswain boat, coached by Donohue, that will compete against a dozen countries Aug. 27-29 on the Sea Forest Waterway.

“I’m so excited that I get to share this moment with the both of them,” says Reilly ‘19. “In many ways, Shelagh is who I learned my rowing experience and skills from and Karen was one of the first people I met my freshman year and helped show me the ropes and what our team culture was like. So, it’s really special that they’re both here with me.”

“Shelagh has made me the coxswain that I am. She’s taught me so much. And to have known Allie from the beginning, it’s special,” says Petrik ’19. “It means a lot to the three of us to represent the University of Rhode Island and make it proud.”

Reilly and Petrik were teammates on the URI rowing team from 2016 to 2019, helping the Rams to three Atlantic 10 titles and three trips to the NCAA Championship. Reilly earned first-team all-conference honors as a senior, and Petrik was coxswain of the Rams’ second varsity 8 boat that placed 20th in the NCAA Championship her junior year. Both earned Collegiate Rowing Coaches Association scholar-athlete awards in 2018.

While Petrik, a coxswain on her high school rowing team, was recruited to the Ram program, Reilly was a walk-on her freshman year with no experience in the sport. At North Kingstown High School, Reilly earned all-division and all-class honors in cross country and indoor track and was captain of the lacrosse team. But she was not recruited by a Division I program. Instead, she was looking for a college where she could study kinesiology. Then she saw a flier that URI’s rowing team was accepting walk-ons.

“I thought it was a really cool opportunity. I realized it was a Division I program, so I thought, ‘wow, this could be really great if I tried my hand at that,’” she says. “After the first couple of practices, I just fell in love with the sport.”

Reilly liked the challenge and newness of rowing. It was physically and mentally taxing. “It’s easy to teach people the basics,” she says. “We all kind of learned it quickly, but then there’s an additional challenge of making it good. It was really tricky, but that was something I really liked about it. You’re always chasing that perfect stroke.”

Petrik’s interest in rowing started her first year of high school when a friend whose brother had rowed suggested Petrik try out for coxswain. Petrik knew nothing about rowing and less about coxswain.

But at 5-foot-1, she was a perfect size for coxswain, who serves as the boat’s leader, steering the boat and helping control the rowers’ pace with her voice. She went on to letter five times in high school, serve as captain her senior year, and win an award for her contributions to the team.

“I realized my personality and the way I worked with teammates was good for a coxswain,” she says. “From there I started to get good at it. I started to really get invested in it.”

Recruited to URI, she used her experience to help newcomers like Reilly learn the ins and outs of the sport, from the terminology to how to correctly put the oar’s blade in the water. The two also built a friendship and roomed together, along with other rowers at URI, forming bonds that made the team feel more like family.

“My whole house senior year were all rowers,” Petrik says. “You share a special bond. You’re waking up at 5 a.m. every morning, you’re going to practice together, and then coming home and going to class. It’s very difficult to do all that. Sharing that bond and having somebody understand what you’re going through is really important.”

Since graduating, Reilly and Petrik have started chasing their careers. Petrik, who graduated in elementary education, is entering her third year of teaching this fall, taking over a fourth-grade class right after the Paralympics in her hometown of Glastonbury, Connecticut. Reilly, a kinesiology major, is working in an outpatient oncology office at Massachusetts General Hospital as she builds clinical hours while applying to graduate programs to become a physician’s assistant.

But rowing practices—on their own along with annual national team trials and practices in the spring and summer—have been a big part of their daily routines since college. This is Reilly’s third year and Petrik’s second as part of USRowing’s PR3 Mixed Four with Coxswain team. The crew that is competing in the Paralympics, which includes Danielle Hansen, Charley Nordin and John Tanguay, is the same one that captured the silver medal at the 2019 World Rowing Championships in Linz, Austria. (Reilly also earned a silver in the event at the 2018 World Championships in Plovdiv, Bulgaria.)

‘Trusting our training, trusting each other’

The PR3 Mixed Four is a para event with rowers classified as those without use or limited use of trunk, arms or at least one leg, or with visual impairments. Still, all the rowers in the boat competed at the NCAA level.

“Everyone in my boat were collegiate rowers at different universities,” Reilly says. “I think we all took that competitive drive from that and it’s really worked out well for us to bring it into a para boat.”

Reilly was born with extra digits on her hands and feet and went through multiple reconstructive surgeries. Today, she experiences stiffness in her feet and ankles that limits her range of motion. Growing up, though, she never saw the limitations. “I always kind of thought of it as a fun fact that I had to share,” she says.

It wasn’t until Coach Donohue suggested Reilly might qualify for para rowing that she thought about it. “I think that was maybe me just being a little bit naïve to the definition of para athletics as a whole,” she says.

At the Paralympics, the PR3 crew will be going for Team USA’s sixth consecutive silver medal in the event at the international level. While Great Britain is perennially strong, Petrik says, it’s hard to have a full sense of the competition they’re up against.

“With COVID canceling a lot of races, it’s difficult because no boats have been able to race internationally,” she says. “We are trusting our training and trusting each other.”
“We’re in a good place this year and I think we’re all gelling pretty well,” adds Reilly.

“We’re all pretty excited to be able to race again. COVID put a lot of races on hold, so we’re all itching to get back on the starting line.”