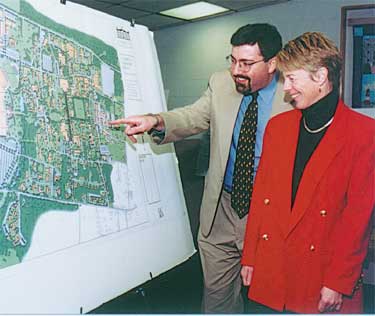 In 2000, Dr. Kathleen Mallon as URI’s director of Strategic Planning and Institutional Research, and executive assistant to the president is shown viewing the university’s master plan as it is unveiled.March 12, 2006 — Dr. Kathleen Mallon, 55, a key force behind the University of Rhode Island’s master planning process, the planning and construction of the Ryan Center and Boss Arena, and an advocate for campus improvement and beautification, died Friday morning, March 10 at Women & Infants Hospital.


In 2003, the Shannock, R.I. resident was named project director for the City Campus Project by the Rhode Island Board of Governors for Higher Education. It is now based at the Community College of Rhode Island’s Liston Campus, Providence.


While fighting her illness, she remained fully immersed in her professional duties. On Monday, March 6, Kathy spoke proudly at a press conference about the Prairie Avenue Revitalization Project, a component of City College, and what it was designed to accomplish for urban students.


Kathy also served as the assistant to the CCRI president for policy and urban initiatives.


Many on URI’s Kingston Campus remember Kathy for her positive attitude, great sense of humor, robust laugh and even her scarf-bedecked hardhat that she wore at URI construction sites.


Kathy joined the URI president’s office in 1994. She served first as executive assistant to the president and later in 1998 was also named director of strategic planning and institutional research. She chaired the Ryan Center Building Committee and directed the major changes to the campus parking and traffic plan, which included the extensive shuttle system in place today with the Rhode Island Public Transit Authority.


During all of these sweeping projects, she brought divergent groups together from the campus and surrounding communities. It was no secret that if you wanted something done efficiently, Kathy was the person for the job.


Kathy spent most of her time as a student and professional at URI. In 1974, she earned her bachelor’s degree in horticulture and her master’s degree in adult education in 1976, both from URI. She earned her doctorate in business administration from URI in 2003.


Holding a variety of positions with URI’s Cooperative Extension from 1974 through 1993, Kathy was a familiar face on Channel 10’s Homegrown program, authored an “Ask the Master Gardener” column in the Providence Journal, and won public information awards as director of the Cooperative Extension Education Center. As an expert on gardening, pest control, and lawn care, she was also quoted frequently in the state’s newspapers.


She is survived by her husband Graham Bell, her daughter, Gillian, and two stepsons, Jamie and Nick. A celebration of her life was held on Tuesday, March 14 at the University Club.


In lieu of flowers and in honor of her legacy as a lover of plants and flowers, the family encourages donations to the Kathleen Mallon Memorial Fund, Master Gardener Foundation of Rhode Island, Inc., Cooperative Extension Education Center, 3 East Alumni Avenue, University of Rhode Island, Kingston, 02881.