KINGSTON, R.I. – January 18, 2007 – Tom Ryan, chairman, president and chief executive officer of CVS Corp., and his wife Cathy have pledged $2.5 million to the ’s Making a Difference campaign, it was announced today. 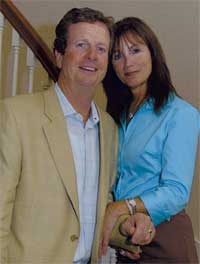 “This is a wonderful gift from Tom and Cathy. It will clearly serve as a pacesetter during this leadership gift phase of our new campaign,” said Robert Beagle, URI vice president for University Advancement. “Tom and Cathy have long been recognized as being among URI’s most generous benefactors and as individuals who also give generously of their time. This gift demonstrates the respect they have for the institution and for the caliber of our faculty, students and research.”

“I’m proud of the work the College of Pharmacy has done over the last 50 years in making a significant contribution to healthcare through its research, outreach and teaching,” said Ryan, a 1975 graduate of the College and recipient of an honorary degree from the University in 1999. “It has also helped many bright, talented, ambitious students begin successful careers. With health care at the forefront of the national and state agendas, I hope my gift will ensure that the College remains a vital player in this arena.”

The gift will support a variety of initiatives in the College of Pharmacy, including a $500,000 challenge grant that will match, dollar-for-dollar, donations of at least $12,500 from other individuals wishing to establish a endowed scholarship for URI pharmacy students. The scholarship funds can be named for the donor or in honor of anyone the donor designates.

“We are challenging College of Pharmacy alumni to make a difference by helping our alma mater build for the future,” said Ryan, who was honored in October as one of the University’s first Distinguished Achievement Award recipients. “By challenging alumni of the College to give generously, we want to build a legacy to help pharmacy students for generations to come.”

Ryan noted that the College attracts a great many students with extraordinary potential, many of whom cannot meet their educational costs. He hopes that funds raised through the challenge grant will help bridge this gap and ensure that a URI education is within the grasp of these promising students.

“I am tremendously grateful for the generosity and support that Tom and Cathy Ryan have demonstrated again and again for the College of Pharmacy,” said Donald Letendre, dean of the College. “Their commitment will help to ensure the continued success of our program and the high quality of our faculty and students.”

In addition to this major gift, Ryan has agreed to chair the University’s second comprehensive capital campaign, which will be launched in the fall of 2007. The campaign aims to raise at least $100 million to recruit and retain outstanding faculty, enhance the student-centered campus experience, provide scholarships, and fund cutting-edge academic and research initiatives. Specifically, the campaign seeks funds for undergraduate scholarships, graduate fellowships, faculty chairs and professorships, academic enterprise funds, the Honors Program, and the library. Funds raised through the campaign will also support several new facilities, athletics and the University’s Fund for URI (formerly known as the Annual Fund).

“I am proud to serve as chairman of this campaign, and even more proud to be an alumnus of the ,” Ryan said. “Today, no major university can hope to maintain its prominence and serve its constituencies without combined public and private resources. This campaign invites all of URI’s many friends to show their loyalty and support by helping to build on the University’s rich tradition of excellence.”

A long-time supporter of the College of Pharmacy and URI athletics, Ryan and CVS provided the majority of the funding for the Thomas M. Ryan/CVS Chair in Community Pharmacy at URI, which is designed to support a prestigious faculty member whose focus is community pharmacy work. Ryan also co-chaired, with former Gov. Lincoln Almond, the successful $15 million private fund drive for the basketball and events venue that bears his name

For more information about the Tom and Cathy Ryan Challenge Grant, contact Richard Popovic in the URI Development Office at 401-874-9017.