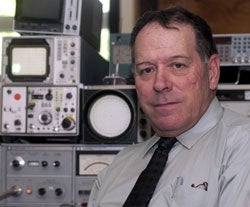 KINGSTON, R.I. — June 2, 2004 — Rob Vincent, an employee in the University of Rhode Island’s Physics Department, proves the adage that necessity is the mother of invention.


An amateur radio operator since he was 14, Vincent has always lived in houses situated on small lots. Because he couldn’t erect a large antenna on a confined property, he has been continually challenged over the years to find a way to get better reception.


“I was always tinkering in the basement. Thank goodness, my parents were tolerant. I can still remember my poor father driving up our driveway after a hard day’s work to see wires wrapped around the house,” Vincent recalls.


“The Holy Grail of antenna technology is to create a small antenna with high efficiency and wide bandwidth,” explains Vincent. “According to current theory, you have to give up one of the three—size, efficiency, or bandwidth—to achieve the other two.”


After decades of experimentation, combined with a 30-year engineering career and Yankee ingenuity, Vincent has invented a revolutionary antenna technology. The distributed- load, monopole antennas are smaller, produce high efficiency, and retain good to excellent bandwidth. And they have multiple applications.


With this technology it will be possible to double, at minimum, the range of walkie-talkies used by police, fire, and other municipal personnel. Naval ships, baby monitors, and portable antennas for military use are other applications. An antenna could be mounted on a chip in a cell phone and be applied to wireless local area networks. Another application deals with radio frequency identification, which is expected someday to replace the barcode system.


“It could even make the Dick Tracy wrist radio with all the features, such as Internet access, a possibility,” Vincent says.


The inventor pursued his quest to build a better antenna in earnest eight years ago when he and his significant other moved into a house situated on a 50-foot by 100-foot lot in Warwick. There was nothing on the commercial market that could fit the lot that would provide the performance Vincent needed to be heard in distant lands and that would be acceptable to his neighbors. All the small antennas being sold were inefficient and lacked bandwidth, which resulted in low performance and high frustration.


Vincent looked at the techniques that were currently used to reduce antenna size and realized something was missing in the way everyone was approaching the problem.


He began to model various combinations into a computer program called MathCad. His first attempt produced a 21 MHz band antenna that was 18 inches high. Normally, antennas for this band are 12 to 24 feet high.


Vincent installed the antenna in his back yard. The legal limit that amateurs can operate is 1,000 watts with the norm being 100 watts. The amateur radio operator experimented with 5 to 10 watts. He reached a station in Chile and made contacts in various European countries. Meanwhile he kept adding power until it reached 100 watts. That’s when things suddenly went bad. Walking outside in the backyard, he understood why. The antenna had melted.


After examining the molten matter, Vincent wasn’t discouraged. This was only a small model and not designed to handle much power. The part of the antenna that failed proved to be the key to the design. After analyzing the failure, Vincent realized that he was able to transform a lot of current along the antenna with even relatively low power.


“Antennas radiate by setting up large amounts of current flow through various parts of their structure,” he says. “The larger the current the more radiation and the better the output of the antenna.”


Vincent went back to the drawing board and continued to improve the technology. Relying on his nearly 30 years at Raytheon Co. and at KVH Industries in Middletown R.I., which provided him with a diversified background in electronics and electronic systems, Vincent overcame a myriad of problems and succeeded.


He established three test sites for various prototypes. Antennas were placed in Westport, Mass. in a salt marsh, the best ground for transmission and reception. Another set of antennas was placed on rocky ground in Cumberland, R.I., the worst kind of site, and at a Warwick site which is in between the two in terms of grounding. The antennas, which resemble flagpoles, worked well at all locations.


A patent is pending on Vincent’s technology. The inventor has made the University of Rhode Island and its Physics Department partners that will benefit from any revenue his invention earns. “The University and its Physics Department has been very supportive and given me time and space to work on this project,” says Vincent who was recently presented the 2004 Outstanding Intellectual Property Award by URI’s Research Office. “I couldn’t have done this without the University’s support. It’s only fair that it share in the profits.”