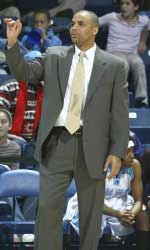 
URI Athletic Director Tom McElroy made the announcement today during a press briefing at the Ryan Center.


He welcomed Garrick back to his home state after a three-month stint as an assistant women’s coach at the University of Virginia. Memories of Garrick’s heroics from the 1987-88 men’s season are still fresh. As a high-scoring guard, he helped lead the Rams to a Sweet Sixteen finish in the NCAA tourney and a 28-7 final record. During that season Garrick put on one of the greatest performances in Rams basketball history when he poured in 50 points against Rutgers en route to a 104-73 Rhode Island win on March 7, 1988.


Garrick succeeds Belinda “Boe” Pearman, who left Rhode Island in July after serving as head coach since 1999 to pursue other interests. Garrick is the sixth head coach in women’s basketball history.


Garrick, who completed his third year as a member of the URI women’s basketball staff in the spring, was named the Rhode Island Basketball Media Division I Women’s Basketball Coach of the Year in May. He was named interim women’s head coach on Dec. 18, 2003 and helped lead the Rams to a 16-13 overall record and an 8-8 conference mark. With Garrick at the helm, Rhode Island posted an 11-10 record. It was the second time in three years that the Rams had finished .500 in the conference.


A former NBA player with the Los Angeles Clippers, San Antonio Spurs, Minnesota Timberwolves and Dallas Mavericks, Garrick also served as a men’s basketball assistant for three years at URI prior to working with the women’s team.


“When people think of Tom Garrick, they think of the excitement, commitment and tenacity he brought to the arena during his playing days in Kingston,” said URI President Robert L. Carothers. “We are justifiably proud today because he is one of our own, someone who gained fame as a high school athlete in West Warwick and then continued his success in all phases of his time here. We are confident that his integrity, loyalty to his alma mater and commitment to his student-athletes will lead to great things for the women’s basketball program.”


McElroy was similarly thrilled with the appointment. “In Tom Garrick, we welcome an individual who lives those values each day of his life,” McElroy said. “Tom’s passion for his University and the Ocean State clearly separated him from other candidates. His basketball knowledge gained as a player on the college and professional levels and his six years as a college assistant coach have prepared him to lead our women’s program.”


A resident of Seekonk, Mass., Garrick earned his bachelor’s degree in speech communications.


As an assistant coach at URI, he has worked in a variety of areas, including recruiting, personal instruction, game coaching, outreach programs and overseeing the program’s academic support system.


“I am extremely excited, happy and eager to get going,” Garrick said. “The University took the time to go through an exhaustive search to find the best possible candidate, and I am honored to be its choice. Taking over the team this past season really whet my appetite. I found it very satisfying to be a head coach. You have to orchestrate things in the right way. It’s like a big chess game.


“We have a great group of women, it’s one of the best that anyone could ask for. It’s a testament to these young ladies’ families and what they’ve been taught at home. I am looking forward to upholding that URI tradition of bringing in top student-athletes.”


Anyone who has followed URI athletics over the years knows what Garrick means to the University’s basketball history. It was during that Sweet 16 run in the 1987-88 season when Garrick and his family became the subject of a CBS story that featured his late father, who was blind, and the values that were central to such a strong family. He was also on the cover of Sports Illustrated that year and made a live studio appearance on the CBS morning show on March 23, 1988.


Sports Illustrated named him one of the 50 best athletes in state history in its millennium issues list of top athletes. The Providence Journal has recognized him as one of the state’s greatest athletes. He finished his playing career as Rhode Island’s 15th all-time scorer with 1,573 points. He finished second in career steals (189) and fourth in career assists (407).