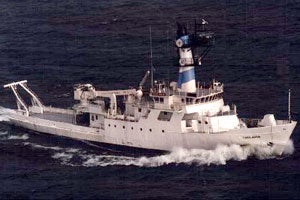 Narragansett, RI — November 30, 2004 — The URI research vessel Endeavor left Narragansett yesterday for a scientific expedition of significance to the people of Rhode Island as well as the community of scientists and staff at the URI Graduate School of Oceanography (GSO).


The cruise is a milestone in that it is Endeavor’s 400th scientific expedition since being launched in 1976.


This cruise is also the first one funded by the State of Rhode Island as part of the Rhode Island Endeavor Program (RIEP), a new, state-supported initiative that provides Rhode Islanders with direct access to the scientific research and educational capabilities of an intermediate class research vessel.


“My congratulations to the crew of the Endeavor on its 400th expedition,” said Governor Donald L. Carcieri. “This invaluable research vessel has been a wonderful ambassador for the University of Rhode Island and the Graduate School of Oceanography, as well as the State of Rhode Island. The important information gathered on these missions is priceless.”


The scientific objective of R/V Endeavor cruise 400 is to determine the subsurface hydrographic structure of oceanic fronts on the continental shelf south of New England. Fronts in the ocean are boundaries between distinct water masses of differing temperature and/or salinity. The rate of exchange of water across these boundaries is thought to control the degree to which materials such as land-derived pollutants and organisms such as fish larvae are mixed horizontally in the ocean. Because fronts are also locations where fish accumulate, it is important to understand the physical processes occurring at these locations.


“Coastal fronts have a profound effect on biological productivity and other aspects of our local waters,” said GSO dean Dr. David Farmer. “This is an exciting cruise that will contribute to our understanding of these important features. This cruise also marks the first in our state-supported activity—a clear signal of the Ocean State’s commitment to ocean research excellence. I wish the team clear sailing and calm seas.”


As part of the RIEP and through the URI Office of Marine Programs, Glen Modica, a science teacher from Cranston East High School will also take part in the cruise. The participation of a high school teacher provides the teacher with shipboard experience that can be used to enliven and enrich the educational content of his/her classes.


“In addition to learning some new science, my main goal in taking this expedition is for my students to learn that ‘real science’ is happening right in their backyards”, said Modica. “To most high school students, most of what they learn is something that happens elsewhere, far away. I hope many will become enamored with the idea of studying the ocean or going out to see on an adventure, and I hope this trip will help spread the word about the opportunities to conduct science in Rhode Island.”


The focus of the expedition will be the newly discovered mid-shelf front that is found in water depths of approximately 50 meters. This front has recently been identified in surface temperature maps derived from satellite measurements, but its subsurface characteristics and the mechanism underlying its formation are unknown at present.


Measurements of water temperature and salinity from a towed undulating sensor package along with observations of ocean currents from the moving ship will provide basic information as to the strength of the front and whether there is an ocean current jet flowing along the front as is often observed at other fronts. In addition to the physical oceanographic observations, measurements of the concentration of natural chemical tracers present in land-derived freshwater will provide estimates of the speed of mixing of these waters with open ocean waters.


After leaving Narragansett, Endeavor will travel to the waters south of Long Island for five days and return on December 3. The lead scientists expect the preliminary data collected on this expedition will result in multi-year grants from federal agencies.

Where is Endeavor now?