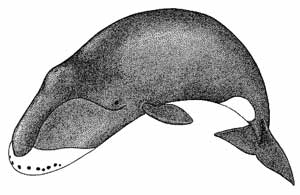 Narragansett, RI — December 28, 2004 — Whale migration routes and habitat use are determined by where the plankton that whales eat can be found, which in turn is driven by oceanic conditions, which depends on the climate. Successful hunting of whales by the Native Inupiat population of Alaska depends on a complex suite of factors in a system that is vulnerable to both environmental and human generated change.


URI Graduate School of Oceanography marine scientist Dr. Robert G. Campbell has received a $340,000 collaborative research grant from the National Science Foundation (NSF) to study the impact of environmental change on the bowhead whale population and Inupiat subsistence whaling along the coast of Alaska.


The project requires a multi-faceted research approach and thus brings together scientists from may different disciplines, including oceanographers, marine mammal biologists, climate and ecosystems modelers, and social scientists.


The NSF grant will allow the scientists to identify and understand the complexity of the linkages, mechanisms, and interactions that occur in the atmosphere, ocean, and within the human population, as well observe and record the response and resilience of these components to environmental change. 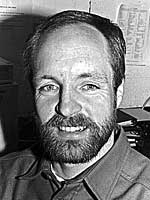 “On a local scale,” said Campbell, “the results of the research will provide a greater understanding of the factors influencing a natural resource, demonstrating linkages between discovery and application to policy issues of bowhead whale management. The social structure and fabric of the Inupiat communities are intimately linked to the whaling tradition and are particularly vulnerable to both environmental change and human-generated pressures.


“On the wider scale,” continued Campbell, “the research will address how multiple physical, biological, and human factors are linked in a complex natural system that may be critically affected by environmental variability.”


The scientists are hoping to determine how climate change in this region, for instance, ice reduction, changes in marine mammal migration and ecosystem structure, will have consequences for local human linkages to the Arctic ecosystem by influencing hunting success, ease of travel, and the relative importance of subsistence and cash economies. In addition, they will study how climate variability and its effects on access to and mobility within the Arctic Ocean have broader impacts for global and local commerce as well as national security.


The project includes an internship program for high school students in the Inupiat community. High school teachers will also participate in the program through the ARMADA Project at the URI Graduate School of Oceanography, which places teachers on research expeditions to gain a fuller understanding on how scientific research is conducted and communicate this understanding to the scientists of the next generation.


The scientists will travel to Barrow, Alaska, in the summer or early fall of 2005 and 2006 to begin sampling and measuring physical, chemical, and biological features of the ocean. They will determine the exact locations in consultation with whaling captains, Barrow community members, and scientists. Sampling will be conducted by scientists, technicians, high school student interns, and high school teachers.


The URI Graduate School of Oceanography is one of the country’s largest marine science education programs, and one of the world’s foremost marine research institutions. Founded in 1961 in Narragansett, RI, GSO serves a community of scientists who are researching the causes of and solutions to such problems as global warming, harmful algal blooms, air and water pollution, oil spills, overfishing, and coastal erosion. GSO is home to the Coastal Institute, the Coastal Resources Center, Rhode Island Sea Grant, the Institute for Archaeological Oceanography, the Pell Marine Science Library, and the National Sea Grant Library.