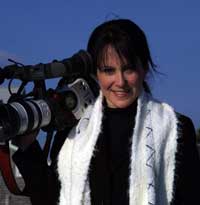 KINGSTON, R.I. –December 31, 2004–Holy Water-Gate: Abuse Cover-Up in the Catholic Church will premiere at the Coolidge Movie Theater, Brookline, Mass. on Monday, Jan. 10 at 7:30 p.m. The hour-long documentary was written, directed and produced by Warren, R.I. resident Mary Healey-Conlon, now a lecturer in communications and film studies at the University of Rhode Island. She has just been notified that she has won a CINE Golden Eagle Award. Prior recipients include Steven Spielberg, George Lucas, and Ken Burns.


Motivated by abuse victims whose stories were being rejected and whose motives were being questioned, the independent filmmaker picked up her camera in 1999 and began filming.


One of the first images in Healey-Conlon’s documentary is a photo of her grandfather, Jim Healey, receiving a blessing, as he became one of the first ordained deacons in the Catholic Church in Rhode Island. Healey was a communicant of St. Matthews Church in Cranston where Father James Silva was pastor.


Silva, Rhode Islanders would only learn years later, was sexually abusing children. The Diocese of Providence transferred the priest to 12 different parishes during the next 16 years where the pattern of abuse continued.


Holy Water-Gate extends beyond the 49 priests, seven religious order priests, and one nun accused of sexual abuse in Rhode Island.


Silva, of course, was not an isolated case. A study of the abuse, authorized and paid for by the U.S. Conference of Catholic Bishops, was conducted by the John Jay College of Criminal Justice, The results, which were released earlier this year, present a more complete picture. The study showed that from 1950 to 2002 there were allegations of sexual abuse against 4,392 priests that were not withdrawn or known to be false. There were 10,667 victims.


“Even the John Jay questionnaire doesn’t capture all of the abuse,” says Healey-Conlon. “It was a self-reporting survey sent to each dioceses and since it wasn’t mandatory, some dioceses refused.”


Holy Water-Gate examines the scandal with interviews of victims, perpetrators and church officials.


Using images of white robed altar boys with their hands clasped, Healey-Conlon introduces viewers to a priest named John Bambrick, who, as an adolescent was molested by a priest who began his abuse by holding young Bambrick’s hand as they rode in a car. As a priest Bambrick was later charged by the church for speaking out about the abuse he suffered.


Father William C., a perpetrator, had a long record of abuse. In the documentary, Father C. says after 17 years of therapy and reassignments to six different parishes, the last assignment to head youth programs, he realized he posed a great risk and voluntarily left the priesthood.


Two years ago, he was heading an internet company and claimed to be earning $250,000 annually, the URI lecturer reports.


How did all of the abuse and the subsequent cover-up happen? Healey-Conlon doesn’t provide easy answers but chooses, instead she says, to let the audience grapple with the issues.


Conlon says the media failed in its job as a watchdog. “They were reluctant to cover stories of abuse,” she says. From 1980 to 1989, only 26 articles about the abuse and the subsequent cover up appeared in major U.S. newspapers. The newspapers’ religion reporter wrote most of those articles, not the crime beat reporter.


“Without The Boston Globe gaining access to the records in 2002 we would never have known the scope and the scale of the abuse,” she says.


Only 180 priests of the 4,000-plus priests accused of sexual abuse have been convicted, according to Conlon. “And not one of the bishops,” she says.


Tickets for the premiere are $6 and can be purchased online in advance at www.coolidge.org, click on events, then purchase tickets.