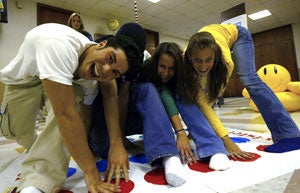 KINGSTON, R.I. – December 1, 2004 — There were live music performances featuring the tunes of the ‘50s, ‘60s, ‘70s and ‘80s, a special URI performance by Charlie Hall and the Ocean State Follies, a reprise of the game show, “The Price is Right” and a sock hop.


The Memorial Union’s 50th anniversary celebration from Nov. 15 through Nov. 19 showcased the Union as the center of campus life.


“We accomplished our goals by getting a chance to turn the spotlight on the Union’s history, and at the same time, enjoy all the activities,” said Bruce Hamilton director of the union and student leadership.


“The week put a smile on everyone’s face,” he added. “We celebrated a building that continues as place where you can share ideas, have debates and promote events, projects and programs. People enjoyed the food, the prizes we handed out, and the music.”


Some special guests participated in the festivities, including Art Sherman, the URI alumnus who painted the mural in 1954 on the ground floor of the union, Jean Berry Wood, of Mystic, Conn., the sister of the original union director, Chet Berry, and Roger Fleet, a URI alumnus and former union assistant director. “Chet Berry’s sister was happy to see that the Union is still a vibrant place,” Hamilton said.


Dedicated on Nov. 13, 1954, the current Union building has been a campus hub for students, faculty, staff and alumni.


Before 1954, the union was housed in Quonset Huts. In The Coffee Times, a newspaper published by the Memorial Union that chronicled the history of the union and the steps that led to a permanent center, former Presidents Raymond G. Bressler and Carl Woodward called for a much needed campus social center.


With additions to the original building completed in 1964 and 1993, the Union has become that much needed center.