Skip to content
Interventions being developed to raise rates 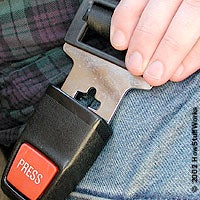 KINGSTON, R.I. — December 16, 2004 — Rhode Islanders wear their seat belts at rates below the national average, and the rate for the state’s high school students is even lower, according to a new study by two University of Rhode Island researchers.


Daniel Berman, executive-in-residence at URI and assistant division administrator for the Federal Highway Administration, and Jerome Schaffran, a URI professor of human development and family studies, surveyed 14,000 students at 29 high schools in the state and made an additional 2,700 personal observations of seat belt use at 13 schools last winter.


They found that 69.5 percent of students wear seat belts – factoring in full- and part-time users — compared to a rate of 74 percent for all Rhode Islanders and 80 percent nationwide.


“The highest cause of death for 16- to 20-year olds is highway fatalities,” said Berman. “But we didn’t have any baseline information about seat belt use among teens in Rhode Island. Now we can begin to develop interventions to try and raise the rate.”


Berman and Schaffran found that 83 percent of surveyed students reported using their seat belts, but on a follow-up question, 13.9 percent of reported seat belt users said they did not wear a seat belt on the day of the survey, effectively reducing the overall rate to 69.5 percent.


“I would have expected higher use by high school students because of the parental factor,” Berman said. “At that age you would think that the students’ behavior is still mostly under the control of their parents.”


The survey also found that passengers are less likely to wear seat belts than drivers; girls wear seat belts at higher rates than do boys; and usage rates were similar among large, small, urban and rural schools. In addition, seat belt usage rates varied by vehicle type, with those riding in pick-up trucks buckling up less frequently than those in sedans and mini-vans.


“What surprised us is that students’ use of seat belts increased the older they got in high school,” Berman said. “Ninth graders had lower usage rates than expected, but rates got better in succeeding years. And oddly enough, the same is true in college, where freshmen have the lowest usage rates. Maybe it has something to do with peer pressure when they enter a new school.”


The researchers are now conducting a similar study of college students in the state, and developing interventions designed to increase seat belt usage to the statewide goal of 90 percent.


“With so many SADD (Students Against Drunk Driving) and other groups in schools, we hope to capitalize on their ability to influence their peers,” said Schaffran. “We’ll be doing focus groups with students to find out what they think will work best in their schools. Ideally we want to put something in place with continuity that the students can keep going themselves without us having to be involved forever.”


Berman and Schaffran tested two interventions last spring. At Narragansett High School, which had one of the lowest rates of seat belt usage among the schools surveyed, students came up with the idea of handing out candy to peers arriving at school wearing seat belts. The incentive increased usage rates by 20 percent, but only for a short time.


At North Kingstown High School, students produced videos aimed at encouraging seat belt use and broadcast them to all students during the school day. “That’s the kind of intervention that could be mainstreamed into the curriculum,” Berman said, “though they’d probably need a series of videos based around various holidays and school events.”


After developing and implementing a variety of interventions, the researchers intend to survey the students again to assess the effectiveness of the interventions.


The research is a collaboration between the URI Transportation Center and the R.I. Department of Transportation. Funding was provided by the R.I. Office of Highway Safety through a grant from the National Highway Traffic Safety Administration.