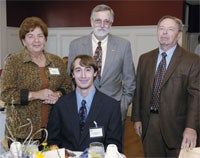 KINGSTON, R.I. — October 31, 2005 — University of Rhode Island student Travis Roberts’ journey to college wasn’t an easy one, nor was it ever guaranteed. Many times during his childhood, his family had to decide whether to use the little money they had for food or for rent. Their electricity was often shut off while the rising cost of rent forced them to move frequently.


By the time he was a senior at South Kingstown High School, most of his friends had become involved with drugs, committed crimes, and dropped out of school. Intent on college, Roberts attended the Community College of Rhode Island for a few years before transferring to URI.


His parents have always been hardworking. Today, his father, Ray, works in the maintenance department of South County Hospital. His mom, Stephanie, works as a physical therapy assistant.


But when his mother was laid off earlier this year and his federal loans failed to cover his educational expenses, Roberts worried that he wouldn’t be able to complete his senior year. Then he got a letter from URI notifying him that he had been awarded the Stephen M. Kaufman Memorial Scholarship.


“It was both a relief and an honor,” the 23-year-old history and political student major says. “It came at a time I needed it most.”


Roberts told his story during a luncheon in October designed to introduce donors to their student recipients. Roberts was delighted to meet his benefactors: Anita and Dr. Donald Kaufman of Cranston and Narragansett. The feeling was mutual.


“He’s such a sincere, humble young man,” says Anita who, like her husband grew up in Providence. “We can appreciate what he went through, although our experiences weren’t the same. Neither of us had parents of wealth. They were working people.”


Her husband agrees. “We both commuted to college. She went to Rhode Island College, I went to URI. I can remember when the $100 tuition was hard to meet,” he recalls. His mother was widowed at the time.


After graduating from URI with a degree in pharmacy in 1962, Donald took a few liberal arts classes, including history classes, to get enough accepted credits for George Washington University Medical School.


The Kaufmans established the scholarship for bright and needy Rhode Island students in 2000. They named the endowment after their middle child, Stephen, a college student who died unexpectedly during surgery. “The scholarship is a way to honor his memory,” Anita says. “He loved history and he loved politics.” Her husband agrees. “It’s a perfect fit,”


History has always captivated this year’s Kaufman scholarship recipient. “History isn’t just a bunch of old stories about long dead people,” Roberts says. “Rather it’s amazing stories about the human race, our greatest achievements and our worst failures…everything we were capable of and might be capable of again in the future. In history, I find hope. I find a few good people who were willing to stand up and fight for justice and change, and those people inspire me to this very day.”


Roberts hopes to go to graduate school to become a history professor or an advocate for the poor, or combine his two interests.


“It’s only by the Kaufmans’ gracious generosity that I am able to complete my degree,” says Roberts who will be the first in his family to graduate with a bachelor’s degree. “One of my major goals is to work on behalf of the underprivileged, so they can live better lives and attend college on a scholarship program of my own design one day.”