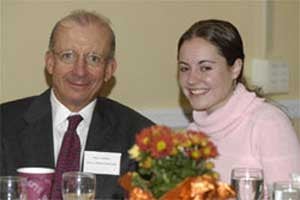 KINGSTON, R.I. – November 3, 2005 – When Barrington resident Alison O’Malley was deciding which college to attend, she struggled to find one that could combine her love of dance, her desire to travel to Spain, and her academic interests in math and science. But when she discovered the Ramettes and the International Engineering Program at the University of Rhode Island, she knew her choice was made.


“I took four years of high school Spanish and two more years in middle school, and I always wanted to travel to Spain,” explained the 20-year-old URI sophomore. “I also knew that I liked math and science, so when I was looking at career choices on the Internet, I settled on either pre-med or engineering. I chose biomedical engineering because it balances out the math and science with my desire to help people, and I can still go to med school after I graduate.”


The International Engineering Program requires that students major in a foreign language and an engineering discipline, and the students spend a year abroad taking classes and working in an internship.


“I went last year to hear a few students talking about their travel year, and they all had great experiences,” O’Malley said. “I’m really looking forward to when I get to go.”


O’Malley was honored in October by the URI College of Engineering as an engineering ambassador, whereby she represents the College at campus events, meets with prospective students and participates in a variety of leadership programs. She was also selected to be the student speaker at a scholarship breakfast attended by nearly 100 students, administrators and URI donors. In addition to receiving a stipend as an engineering ambassador, she is a URI Centennial Scholar and the recipient of the Peter A. Pelletier Endowed Engineering Scholarship.


O’Malley is also beginning her second year on the URI Ramettes dance team, which performs at men’s and women’s basketball games and at other public events at the University. When O’Malley auditioned, she competed against 40 other students for just four openings on the 13-member team.


But she had a leg up on the competition. She’s taken dance classes at Rosemary’s School of Dance in Warren since she was 2 years old and competed with them for eight years. “I do tap, jazz, ballet, hip hop, point. It’s my favorite hobby,” she said. “I was a sprinter on the track team in high school, but I think I’ve run more in training for the Ramettes than I ever did in high school.”


O’Malley said that the scholarships she received played an important role in her URI success. “I don’t have time for a part-time job, so the scholarship funds are allowing me to keep up with my dance and keep my grades up.”


Peter Pelletier knows the importance of scholarships as well. The 1967 alumnus of URI established the scholarship that O’Malley received to help engineering students pay for their education. “I established the scholarship because of the tremendous value I received from my engineering degree from URI,” Pelletier said. “I have always remained loyal to URI and the engineering program, and I always felt the students who are qualified to enter the program are the best and brightest. It’s a very challenging program and worth all the energy expended.”


Pelletier worked at Raytheon, Arthur Andersen, and New England Merchants Bank before forming his own consulting practice in 1980 to help financially troubled companies. He serves on the URI College of Engineering Advisory Council and frequently meets with current students and faculty.


“I was very pleased to meet Alison at the scholarship breakfast,” said Pelletier, who grew up in Newport and now resides in Norwell, Mass. “She is very bright and personable, with great varied interests. She has the type of balance you need in your life to be successful. All the students I met that day were impressive and make me proud to be a Ram.”