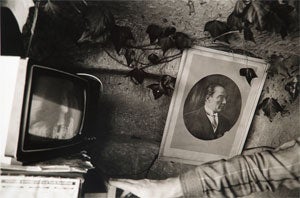 
GALLERY TALK by the artist


Kingston, RI—Alan Metnick is a committed photographer and also exhibiting sculptor, printmaker and draftsman. But it is photography that has sustained him most continuously, and to which he has been most faithful, since he moved from Chicago to Providence roughly 35 years ago to study the medium at the Rhode Island School of Design (earning his MFA in 1973).


Aaron Siskind and Harry Callahan dominated the RISD Photography department in those days and formatively trained and stimulated so many creative future photographers. Alan Metnick was included in “Aaron Siskind and his Rhode Island Circle,” mounted in 2004 at the Newport Art Museum. This was also the time, while still a student, that Metnick first discovered the Middle East landscape.


Beginning with his student days, Metnick became an inveterate traveler, and he has documented political conflict in many places around the world (including Israel, Soweto, Sarajavo) but he has also traveled and interpreted the landscape of Turkey, Belize, Italy and Corsica. While averse to the label “documentary” photographer for the limiting definition imposed by any label, he admits that “the photographs I have taken are in reality documents.” A definition of the term that Metnick undoubtedly would accept is that formulated in Photography Curator John Szarkowki’s landmark 1967 exhibition for The Museum of Modern Art, New York, “New Documents.” As critic Philip Gefter recently recalled, the documentary approach charted by Szarkowski served more personal ends, as the curator had written, “Their aim was not to reform life, but to know it.” (See Gefter’s “Defining the Moment, for the Moment, Anyway,” The New York Times, 10/16/05 AR 33.)


The upcoming Corridor Gallery exhibition concentrates on the surprising contrasts of the natural and built environment evident in the landscape of Israel and Turkey. Metnick’s initial journey to the Middle East, as well as subsequent trips, has yielded a vast corpus of culturally sensitive images. Interesting juxtapositions of form and content will be made throughout the Corridor Gallery installation. The emphasis is not on the people of these countries per se, but on evidence of their activity, whether in urban or rural zones: the deposits of ancient sculptural remnants, abandoned houses, tourist buses aligned on a precipice, old and new portions of a city, or groves of trees seen against desert landscape.


Metnick’s gelatin silver photographs are printed on paper warm in tonality and are toned further. They were taken with the small format, high quality 35 mm Leica M2 camera. Nearly 40 photographs spanning nearly 20 years will be shown in the Corridor Gallery, a body of work charting one photographer’s journey to parts of the world that engage him artistically again and again.


Metnick has shown his work, taught, lectured and served as an invited guest juror for photography competitions over many years both in RI and Massachusetts. He owned and operated the former Silver Bullet Gallery, Providence (1980-90), to ensure a photography dedicated exhibition space on the local scene, and published a limited edition group portfolio for that Gallery’s exhibiting photographers. He is represented by Gallery Z in Providence.

The Galleries are closed on federal and local holidays.


All programs of the Fine Arts Center Galleries are open to the public without charge.

All are handicapped accessible.