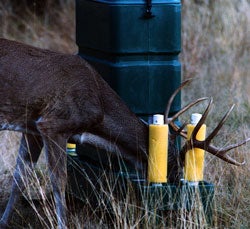 KINGSTON, R.I. — November 2, 2005 — Thirty tick-killing bait stations were deployed last month throughout the town of Narragansett by a team of University of Rhode Island researchers in what is likely the largest tick control project in the nation.


The bait stations are being used by URI Entomology Professor Thomas Mather and Research Associate Nathan Miller to kill Lyme disease-carrying deer ticks where they concentrate and are most vulnerable — on deer. The researchers have launched the project in Narragansett because it has one of the highest rates of Lyme disease infection in the state.


“Most people only pay attention to ticks in the spring and summer, and they’re surprised if they find one at this time of year,” said Mather, director of the URI Center for Vector Borne Disease. “ But adult ticks are most active in mid-fall and again in early spring, so now is the time to be on the lookout for adult stage deer ticks.”


The device was developed by the U.S. Department of Agriculture and was tested in five states, including Rhode Island, from 1997 to 2002. It does not increase deer populations. Regulations for its use require the bait station be placed no closer than 100 yards from a house or playground.


According to Miller, the bait stations have been placed in areas of town where the deer population and Lyme disease risk are highest. “We want to make sure every deer in the area uses one regularly,” he said.


“This is a demonstration project designed to work with a local municipality and guide them through the process of tick control,” said Mather. “This is the first time anyone has done tick control on such a large scale to see if it reduces the incidence of disease.”


The research project, which was originally scheduled to begin last fall but was delayed in order to secure the necessary scientific and regulatory approvals, will also determine the best means of regularly maintaining and restocking the device. One of the project’s goals is to determine how a municipality would implement and maintain an area-wide tick control effort such as this. As a final product of the study, Mather and Miller will create an implementation manual that other municipalities can follow in developing a tick control program for their communities.


“Rhode Island is leading the way in tick control, and we believe this project can have a significant impact on deer tick populations and Lyme disease rates in the state,” Mather said.