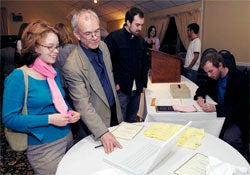 KINGSTON, R.I. — November 22, 2005 — The University of Rhode Island hosted a unique and successful fundraising event on Thursday, Nov. 17. The “Rhody Artists for Rhody Evacuees,” or RARE event, was a silent auction of works by well-known Rhode Island artists to support the University’s fund to build a Habitat for Humanity house for victims of Hurricane Katrina.


Held at the University Club on the Kingston Campus, the auction raised nearly $6,000.


“We were astonished at the wonderful response by area artists and the outcome of the auction. Most of all, we are very proud of the students who created and organized the entire affair,” said Honors Program Director and philosophy Professor Galen Johnson. 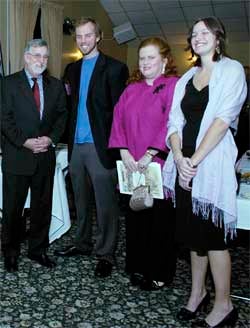 Johnson said the idea for the auction was initiated by URI honors students Mark Hinchliffe of Richmond, R.I. Fellow honors student, Michaela McCaughey of Warwick, also worked to organize the event that was sponsored by the University’s Honors Program, the University Club and Office of the Provost.


A few of the top-sellers at the event were the painting, “On the Beach,” by Anne Packard (Provincetown, Mass.) and donated by Blazing Editions Publishing Co. of East Greenwich; an untitled original pen-and-ink drawing donated by URI Professor David Gitliz and Linda Davidson; and the handmade Adirondak chair, entitled “Poolside Fetish,” by President Carothers. 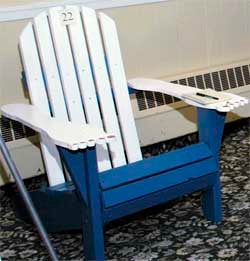 “The chair made by the President was quite something,” said Johnson. “The arms had red-painted toes with a toe-ring and on the back he had the name ‘Poolside Fetish’. It was purchased by the Tom McCaughey, Michaela’s father,” he added.


Johnson said shortly after the hurricane, Hinchliffe suggested the fundraising event and immediately began to build the support needed with his peers, faculty and staff and with the artists. “It has been refreshing and rewarding to see all of their work come together,” he added.