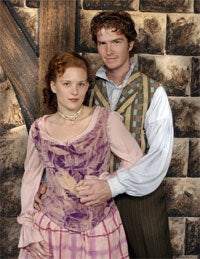 
Shakespeare’s most popular play still proves that love can triumph over death and hate. The play offers a blood feud as old as time. Rival gangs fight to the death in the streets and sewers of decayed, lawless Verona. However, true love manages to sprout between the cracks of violence and corruption.


Peter Sampieri, a member of the Society of Stage Directors and Choreographers, will direct the play. He is a graduate of the Trinity Repertory MFA Directing Program where he directed The Taming of the Shrew, Wit and A Christmas Carol. He has also directed at the Portland Stage Company, the Gamm Theatre in Providence, Mixed Magic Theatre, and Dramatist’s Guild in New York City. He serves as a guest artist on the faculty of Brown University and Rhode Island College.


The play’s cast members, characters, and hometowns are: