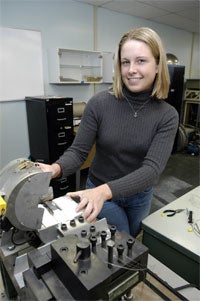 Engineering internship in France to begin in January


KINGSTON, R.I. — December 19, 2005 — Indianapolis resident Ginny Sorrell gets a lot of strange looks when she tells people she is majoring in political science, chemical engineering and French at the University of Rhode Island. They can’t quite figure out how she will manage to merge the seemingly unrelated fields into a career.


But Ginny isn’t worried. “It wasn’t my plan to major in those three areas; it just happened that way,” she explained. “I started out in engineering, and I became interested in French and political science along the way.”


The 22-year-old, fifth-year student chose to attend URI because she was looking to experience a different culture from what she grew up with in the Midwest, and she felt like URI fit her both academically and athletically. A star swimmer in high school who swam for Team Indiana in 2000 and 2001, she competed for four years on the URI swimming team in the fall and winter – finishing as the highest point scorer on the team during the 2004-05 season – and for the varsity crew team in the spring.


Academically, Sorrell developed a passion for chemistry in high school. “I like learning the reason behind why and how things work,” Sorrell said. “It’s fun to play with chemicals and think about how atoms interact to make up everything around you.”


She used this curiosity and her engineering know-how to participate in a research project at URI to develop a testing facility for evaluating strain gauges used to maintain quality control in jet engine parts. According to Sorrell, strain gauges are used “to get a feel for how long a part is going to last” by testing each part to determine how much tension and compression it can withstand. Working in collaboration with URI Professor Otto Gregory, she developed a protocol for using a fatigue-testing machine to test and compare the strain gauges used by various jet engine companies.


In January, Sorrell will receive additional hands-on training in France during an internship at the research and development offices of Saint-Gobain, an international producer and processor of glass, ceramics and plastics. She will be based in Aubervilliers, just north of Paris, where she will help evaluate methods of using metal nanoparticles in industrial glass products to provide pigment without the resultant defects caused by other pigmentation processes.


Her trip to France won’t be her first internship. Last summer she interned in the office of U.S. Senator Richard Lugar, chair of the Senate Foreign Relations Committee. Her primary task was to research upcoming legislative issues, including the Haitian elections, the direction of the Iraq War, and prospects for reform of the United Nations.


“I am extremely fascinated with political science, international government, national government and the entire political process,” Sorrell said enthusiastically. “My internship was an amazing experience. We had lunch or dinner with the Senator every week, and we’d talk for hours about politics. He was terrific. And I developed a big interest in how legislation is passed.”


As she looks toward graduation in May, the University of Rhode Island student has finally figured out the answer to the much-asked question about what kind of job she intends to pursue to combine her disparate majors.


“I think I’m going to go to law school,” she said with a smile. “With a law degree, I’ll be able to work for an international engineering company handling international jurisdiction issues that come up when the company has to manage plant sites on a global scale. I might even end up back at Saint-Gobain.”