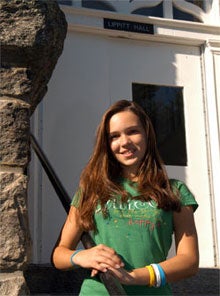 
KINGSTON, R.I. – December 1, 2005 — Octavia “Tavie” Abell seems to be following in her late father’s footsteps. Footsteps, in fact, play an important role in their story.


Tavie’s father was Paul Abell, a professor of organic chemistry at the University of Rhode Island for more than 40 years. His research included the chemistry of free radicals, the chemical analysis of Apollo 11 moon rocks, and studies in paleoclimatology. He published widely and traveled extensively.


For 17 summers, he worked with Richard and Mary Leakey, the famed anthropologist/paleontologist husband and wife team. Working with Mary Leakey in 1978, Abell discovered the now famous hominid footprint in Tanzania, which at 3.8 million years provided the oldest evidence of two-footedness.


A true Renaissance man, Abell was a painter, book collector, gardener, cabinetmaker, and played the violin with the URI orchestra.


“He was one of the coolest people you could ever meet,” says his 14-year-old daughter who is also a lover of both science and the arts. “He never acted old. He was always young and lots of fun. But he also had a serious element.” She pauses and then smiles when she recalls a photo of her father wearing glasses a student made for him out of pretzels. “My father thought they were great.”


When the professor emeritus died in 2004 of prostate cancer at 80, he left half of his estate to his young daughter for “educational purposes.” Tavie decided not to use all of the money for herself. Instead, she decided to use some of it to honor her father in a way she knows he would approve.


She is leading the effort, with her two stepsisters Erin Gallagher of Albany, Calif. and Susan Abell of Winchester, Mass. to establish the Paul I. Abell Memorial Honors Student Award at URI.


“When I was young and we went shopping at a local store, it seemed to me that the whole world knew my father. Former students would always come up to him and want to talk,” Tavie recalls. She expects some of her father’s former students would like to contribute to the newly established fund.


“He was the quintessential hip professor,” says Tom Zorabedian, now the senior development officer for the College of Arts and Sciences, who took one of Abell’s chemistry classes. He’d throw parties at his house at a time when students and faculty socialized more. He had such youthful ideas no one thought of him as old. Many of us were non-science majors,” Zorabedian recalled. “Yet he was able to make chemistry accessible and relevant for everyone.”


“My father was well known and had tons of opportunities to work at different places, yet he chose to work at URI. That says something about the University,” says Tavie says, explaining why she chose URI students to be beneficiaries of her largess. “Long after he retired, the URI Honors Program asked him to teach an evolution class. He loved it,” says Tavie who sat in on a few classes. “He loved being with students.”


The awards will help students pursue their research interests and complete their senior projects. “It would be fine if they use the award for travel expenses. That would be compatible with his interests,” says Tavie, who has already traveled to Iceland, Turkey, Greece, Egypt, Kenya, Nepal and Australia.


Because Abell was retired when Tavie was born, the father and daughter were able to pack a lot of living into 12 years, according to Tavie’s mother and Abell’s second wife, URI alumna Frances Martindale, masters of English literature ’90 and masters of library science ’00.


He made up games and built a tree house for her. He also created a line of clothing for her American Girl doll collection. Since her parent’s were divorced when she was young, she divided her time between homes. Her father designed and built a vacation home in Nova Scotia and lived in a geodesic dome with fieldstone fireplaces just outside the URI campus.


“I might study architecture,” the eighth grader says, recalling her days at the dome. “When I was born, he added a princess tower to it,” she says. “And a flag.


“It’s weird without him. You don’t realize how much fathers bring to you. No one’s perfect, but he was the closest thing.”


People wishing to contribute to the Paul I. Abell Memorial Honors Student Award should contact Tom Zorabedian, senior development officer for the College of Arts and Sciences, at 401-874-2853 or zman@advance.uri.edu.