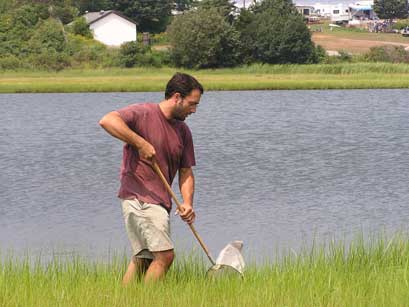 KINGSTON, R.I. — December 27, 2005 — Most efforts to eradicate invasive pests involve the use of chemical pesticides. But two University of Rhode Island students are taking a different approach: finding natural methods of controlling these unwanted, introduced species.


Dave Viola of East Greenwich and Caitlyn MacGlaflin of Charlestown spent the last six months working with URI researchers Richard Casagrande and Lisa Tewksbury evaluating interactions between insects and plants as part of a research fellowship they were awarded last spring.


Viola, a senior environmental plant biology major, investigated how to control Spartina, a salt marsh grass that is native to the Atlantic and Gulf coasts but which has become a pest species along the West Coast. Here in the East, picture wing flies feed on Spartina to keep it under control, but before the flies can be released to control the plant in the West, Viola wanted to learn if they might eat other plants and become pests themselves.


So Viola introduced the flies to 540 pots containing 30 species of plants to see if the insects would lay their eggs on the plants. If so, the insect larvae would eat the plants and kill them. “I found the larvae in six or seven plant species, some of which are economically important to the area, like rice in California,” he said. ”So using the flies to control Spartina in the West doesn’t seem like a viable option.”


MacGlaflin’s project was somewhat the reverse of that pursued by Viola. Rather than attempt to control a plant using an insect, she was attempting to protect a plant from an insect. “An invasive insect called the lily leaf beetle lays its eggs on the underside of lily leaves and once the larvae hatch, they feed on the plant,” explained


MacGlaflin conducted tests to determine if a hybrid lily called Black Beauty – which is a vigorous hybrid with a beautiful flower — had natural defenses that would thwart efforts by the beetle to feed on it. Her results were encouraging.


“I found that the eggs laid on Black Beauties don’t fully develop, so the larvae don’t destroy the plant,” said MacGlaflin. “Planting the hybrid Black Beauty in home gardens instead of planting oriental or Asiatic lilies gives gardeners an alternative to using pesticides to kill the beetle.”


After the students graduate from URI next spring, they both plan to attend graduate school.