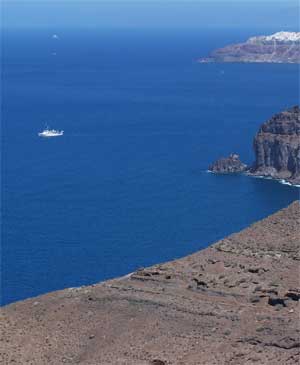 KINGSTON, R.I. – August 23, 2006 – An international team of scientists has found that the second largest volcanic eruption in human history, the massive Bronze Age eruption of Thera in Greece, was much larger and more widespread than previously believed.


During research expeditions in April and June, the scientists from the University of Rhode Island and the Hellenic Center for Marine Research found deposits of volcanic pumice and ash 10 to 80 meters thick extending out 20 to 30 kilometers in all directions from the Greek island of Santorini.


“These deposits have changed our thinking about the total volume of erupted material from the Minoan eruption,” said URI volcanologist Haraldur Sigurdsson.


In 1991 Sigurdsson and his URI colleague Steven Carey had estimated that 39 cubic kilometers of magma and rock had erupted from the volcano around 1600 B.C., based on fallout they observed on land. The new evidence of the marine deposits resulted in an upward adjustment in their estimate to about 60 cubic kilometers. (The eruption of Mount Tambora in Indonesia in 1815 is the largest known volcanic eruption, with approximately 100 cubic kilometers of material ejected.)


An eruption of this size likely had far-reaching impacts on the environment and civilizations in the region. The much-smaller Krakatau eruption of 1883 in Indonesia created a 100-foot-high tsunami that killed 36,000 people, as well as pyroclastic flows that traveled 40 kilometers across the surface of the seas killing 1,000 people on nearby islands. The Thera eruption would likely have generated an even larger tsunami and pyroclastic flows that traveled much farther over the surface of the sea.


“Given what we know about Krakatau, the effects of the Thera eruption would have been quite dramatic,” said Carey, a co-leader of this year’s expeditions. “The area affected would have been very widespread, with much greater impacts on the people living there than we had considered before.”


Thera has erupted numerous times over the last 400,000 years, four of which were of such magnitude that the island collapsed and craters were formed. Some scientists believe the massive eruption 3,600 years ago was responsible for the disappearance of the Minoan culture on nearby Crete. Others link the eruption to the disappearance of the legendary island of Atlantis. 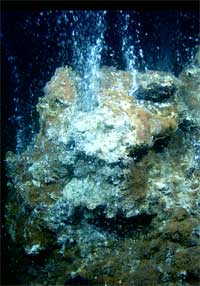 While investigating the seafloor around Santorini, the scientists explored the submarine crater of the Kolumbo volcano, just 5 kilometers from Thera and part of the same volcanic complex, and discovered an extensive field of previously unknown hydrothermal vents. Using remotely operated vehicles from the Institute for Exploration, the scientists recorded gases and fluids flowing from the vents at temperatures as high as 220 degrees Centigrade.


“Most of the known vents around the world have been found on the mid-ocean ridges in very deep water and in areas where there are geologic plate separations,” Sigurdsson explained. “The Kolumbo and Santorini volcanoes are in shallow water at plate convergences, the only place besides Japan where high-temperature vents have been found in these conditions.”


“The high temperature of the vents tells us that the volcano is alive and healthy and there is magma near the surface,” added Carey.


The scientists said that, in addition to fluids and gases, the vents are emitting large quantities of metals, including silver, which precipitate out to form chimneys on the crater floor up to 10 feet tall and 2 to 4 feet wide. The floor of the crater is covered in a layer of red and orange mats of bacteria 2 to 3 inches thick that live on the nutrients in the vent fluids. Bacteria also cover the vent chimneys, and 4- to 5-inch long, hair-like bacterial filaments extend from the chimneys making them “look like hairy beasts, like woolly mammoths,” according to Sigurdsson.


The expedition was part of a longer research cruise led by National Geographic Explorer-in-Residence Robert Ballard, a URI oceanography professor and president of the Institute for Exploration, which included a search for Bronze Age shipwrecks in the Black Sea and a survey of the seafloor in the Sea of Crete. Additional details can be found at www.uri.edu/endeavor/thera or www.oceanexplorer.noaa.gov/explorations/06blacksea/.


The research expeditions were funded in large part by the National Science Foundation, with additional support from the NOAA Office of Ocean Exploration, the Rhode Island Endeavor Program, the Institute for Exploration, and the National Geographic Society. The April expedition was conducted aboard the Greek research vessel Aegaeo, while the June cruise was aboard the URI vessel Endeavor.


Live video of the June expedition was broadcast over the internet 24 hours a day by Immersion Presents, which also broadcast four, 30-minute live programs each day to museums, school districts, science centers and Boys and Girls Clubs featuring Sigurdsson, Carey and Ballard.