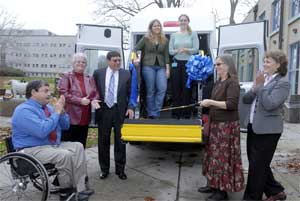 KINGSTON, R.I. – November 30, 2006 – Services for students with disabilities at the University of Rhode Island have been continually improving and evolving.


The latest improvement is the purchase of a new accessible van for students with disabilities. Earlier this month, University officials, students, faculty, and staff unveiled the new $34,000, 2006 Ford E250 Extended van during a brief ribbon-cutting in front of the Memorial Union.


“This is the third accessible van we’ve had at the University,” said Tom Dougan, vice president of Student Affairs. “But the first was a used vehicle and the second was purchased with Foundation funds”. The purchase of this new Ram Van is a great statement by President Carothers and the University about our commitment to disability services for students.”


“Being able to get from one place to another on a large campus is important to students with disabilities,” said Megan Frost, a graduate student working in disability services. Fellow graduate student Grace Jonusis added, “The van provides a safe, convenient way for students to get around, especially in bad weather.”


The vehicle can hold up to two persons in wheelchairs and five to nine passengers using regular seating. The wheelchair lift is on the rear of the van, not on the side, as it was with the previous van.


The Ram Van is operated during the week by URI Disability Services for those with permanent and temporary conditions. It provides service to all residence halls and smaller areas of the campus.


“It is a great additional means of transportation that adds to what the University has already offered with the RIPTA shuttles, with point-to-point pick up and drop off,” said Paul DePace, director of capitol projects, who was a passenger in an earlier accessible van.


The previous van was showing major signs of wear and tear, including no rear defroster, insufficient heat, and a worn out floor. “Because of the disrepair of the old van, a new van was imperative,” said Pamela Rohland, assistant director of Student Life and director of Disability Services. “The previous van was purchased in 1995, and although it only had around 50,000 miles on it, the impact of the constant stopping and going and the harsh winter season lead to accelerated aging,” she said.


Jason Black, a URI graduate student who has used the Ram Van to get around campus, had noticed the deterioration of the van over the past few years. “Had the van not been replaced, the services would likely have been discontinued soon,” Black said.


As Black has pointed out, having the Ram Van is vital to the Disability Services for Students’ mission, which “recognizes disability as cultural diversity and fosters an inclusive environment for all in the University through education, awareness, and accessibility.”


“I am extremely pleased that the University recognized and acted upon the need to continue the service for current and prospective students, faculty, and staff with physical disabilities with the purchase of the new van,” he said.