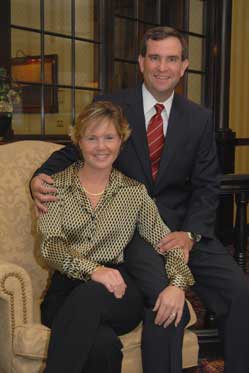 KINGSTON, R. I. — December 13, 2006 — They were involved in numerous campus activities as students.


And ever since their commencement in 1985, Peter Miniati III and Sandy (O’Brien) Miniati have continued that community involvement, both here in Kingston and where they live.


Now Peter and Sandy, who met as freshman orientation leaders, have ensured that students who enrich campus life through their involvement in extracurricular activities will have financial support.


The Barrington couple has made a $25,000 gift to “Making a Difference, the University of Rhode Island Campaign,” to establish the Miniati Family Endowment. It will support undergraduate scholarships for returning students who have demonstrated academic excellence and leadership in extracurricular activities.


“Because of our families, we were encouraged to become active at the University,” said Peter, who has been vice president of wealth management at Washington Trust Bank for more than three years.


“We wanted to do something that not only addressed financial need and academic performance, but also rewarded campus involvement,” said Sandy. “We were involved and we know that helped us grow. Because that was such a rich experience, we continued that involvement as alumni and in our town,” said the former director of the Barrington Youth Soccer Association.


“Peter and Sandy do it all,” said Robert M. Beagle, vice president of University Advancement. “They are great volunteers, they participate in many URI activities, and they are serious donors. It is always gratifying when alumni who have had great undergrad experiences themselves, come back later in life to do the kinds of things that will make it possible for current and future students to have positive University experiences too.”


As a student, Sandy was also a member of the Union Board, a campus tour guide and member of Alpha Delta Pi sorority. A former women’s soccer player at Rhody, she continues to coach local youth soccer, and is about to open her own business, Barrington Built-Ins. Peter was Student Senate vice president and a member of Phi Gamma Delta fraternity. Peter is now a member of the Making a Difference Campaign Leadership Committee and president of the Alumni Association.


Peter reconnected with Sandy a few years after graduation. The spark was ignited at an event that still makes her giggle. “Peter and I participated in a bachelor auction to benefit the Cystic Fibrosis Foundation where I was the high bidder, winning a date with him,” Sandy said.


Peter and Sandy recalled their times at the University fondly and realize the role it played in their professional and personal development and how it led to their marriage.


“This is designed to reward the young people who come to URI and contribute to campus life in ways that extend well beyond the classroom,” Sandy said. “We are looking to assist the leadership individuals.”


“There are plenty of young people who come to URI, find their passion here, and become outstanding campus leaders,” Peter said. “They are going to become the leaders in Rhode Island.”