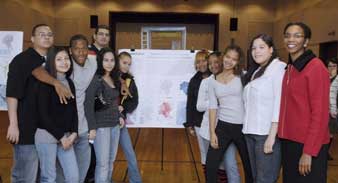 
KINGSTON, R.I. — December 15, 2006 — Feinstein High School seniors Eudys Bello and Steven Astacio jumped from their seats and at first it seemed as though they were re-enacting a typical high school scene with the two shouting greetings.


But then they started rapping about “needing a ride” and “catching that bus” in an urban ode to the Rhode Island Public Transit Authority and the daily routine of commuting to school. It was funny, factual and engaging, especially when the two teens incorporated the classic line, “the wheels on the bus go round and round,” from the popular kids’ song.


They joined about 60 fellow students from the Providence high school for a forum titled “Understanding the Activity Patterns of Teenagers living in Providence, R.I.”


It was the first public forum of a joint transportation project involving Feinstein High School, the University of Rhode Island and the Providence Plan. The work is being funded through a grant from the University’s Transportation Center.


Talia McCray, assistant professor of business administration at URI and the principal investigator, came up with the idea of enlisting Feinstein students in a research project on urban transportation issues. Juniors and seniors at Feinstein were the participants in the fall semester and freshmen and sophomores will be involved in the spring semester. The research team of McCray, Farhad Atash, professor of community planning and landscape architecture; Charles Collyer, professor of psychology; and Donald Cunnigen, associate professor of sociology/anthropology, will present its findings in fall 2007.


During their mid-December visit to the Kingston Campus, the students presented their findings and recommendations for improving their city in six categories: immigration, housing, the I-195 project, transportation, crime/public safety and land use.


“When I approached Feinstein’s principal, K.C. Perry, about involving his students in the study, he agreed, saying ‘as long as you teach them what you do and how you do it’,” said McCray, a transportation planning expert.


“So, we trained the students in spatial analysis, non-violence techniques to address difficult issues, interviewing techniques and transportation planning,” McCray said. “We also had guest speakers from RIPTA, the Statewide Planning Office, the engineering field and the Army.”


When the event wrapped up in the Memorial Union ballroom, McCray joined URI faculty members, Providence Plan officials, a representative of the Providence Police Department, and Feinstein faculty in applauding the students.


“I thank you students so much for working with us,” McCray said. “We learned as much from you as you did from us.”


In their presentations, the students used sophisticated maps and statistical charts to highlight their findings. They also prepared colorful, dramatic posters that summarized their work.


Natasha Torres, who has applied for early admission to the University, said the project inspired her to learn about new areas. “I would never have had the chance to find out about crime in my neighborhood,” she said. “This project was fun and exciting because the URI people were not much older than we are.”


Torres, who was one of the stronger speakers during the presentations, added, “I love to speak in front of people. I want to become an OB-GYN, and I know talking to patients is so important. This was great preparation.”


Rappers Astacio and Bello said they opened their group’s discussion with a rap to liven things up. The applause, laughter, and smiles from their fellow students and faculty proved the success of their approach.


“This is a really great program,” Astacio said. “I really appreciate how they taught us how to do analysis, how to do our presentations. They gave us a lot of freedom to learn on our own and to choose our own topics. Plus, this was a great way to experience what college is like,” said Astacio, who hopes to attend Bryant University.


“They showed us something new,” said his rapping partner Bello.