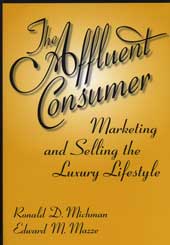 
KINGSTON, R.I. — December 8, 2006 — Most people probably don’t think of themselves as affluent. But after decades of consumer and marketing research, Edward M. Mazze has discovered a trend that would surprise many.


“Almost anyone could be considered an affluent consumer,” said the distinguished professor of business administration at the University of Rhode Island. “Most people purchase high-end goods and services for special occasions, such as birthdays, weddings, anniversaries and graduations, which makes us all, at one time or another, affluent consumers.”


In their new book, The Affluent Consumer, Marketing and Selling the Luxury Lifestyle, Mazze and co-author Ronald D. Michman, professor emeritus of marketing at Shippensburg University in Pennsylvania, examine what they say is the exponential growth of the affluent sector.


Published this year by Praeger Publishers, the 194-page book is the first of its kind, according to Mazze, because it includes economic and demographic data, and the authors’ expertise developed over decades from studying, teaching and consulting in marketing and consumer behavior.


Mazze and Michman’s book examines the affluent sector’s growth and its increasing diversity, in terms of ethnicity, education, location and professional background.


“In 2004, there were 8.2 million households in the United States with net worth over $1 million, excluding primary residence,” according to the book jacket.


Unlike others, this book examines market segments, such as professional women managers, the African-American, Hispanic, Asian, and the gay and lesbian markets, as well as the aging population.


Mazze said it is also unique because it examines the phenomenon of what he called trading up, action by a consumer who doesn’t consider himself or herself affluent, but who goes to Nordstrom for a certain clothing item instead of Wal-Mart or Target. “That decision could be sparked by a special occasion or a feeling by the consumer that he or she has earned a luxury item,” the Saunderstown resident said.


The professor added that discount stores like Wal-Mart and Target, however, are reaching the affluent consumer by featuring designers and product lines associated with luxury and affluence. The reverse is also happening at retailers like Tiffany & Co. and Nordstrom, which are introducing less expensive products to attract middle- and lower- income consumers.


“No matter who we are, we are trading up,” Mazze said. “It’s the person who moves from the discount sneakers to the Nike or adidas brands, or the person who decides to trade in his Chevy for a Lexus.”


In the 1960s, Mazze was a consultant for General Motors Corp. When he moved, he sold his Cadillac Eldorado to an individual who lived in a house with no indoor plumbing. “That purchase gave him immediate status and that is typical behavior for many,” Mazze said.


“When I started doing this research, the middle and affluent classes did not exist in large numbers in China, Russia, India, or Brazil. But there are growing affluent populations in all of these countries, even Vietnam,” said Mazze noting that the book is being translated for Russian and Chinese readers.


Even high school and college students are entering the affluent category. “Wouldn’t you say that a student who purchases a $600 video gaming system is making a luxury purchase? I would. When I grew up, student wealth was unheard of, but now it is common.”