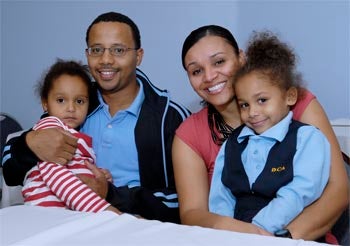 KINGSTON, R.I. –December 5, 2006—Angelo DaFonseca marched in the University of Rhode Island’s 1998 May commencement, but was short three credits to be awarded his degree.


His wife, Veronica “Voninha” DaFonseca, marched in URI’s 2001 commencement but was six credits shy of a degree.


Born in Cape Verde, the DaFonsecas met in high school in Providence, and married in 2000. Their graduation story isn’t unusual. URI allows students a few credits short of their degrees to participate in commencement exercises with their classmates.


Angelo, an economics graduate, promised himself that he would complete his missing three credits that following September.


But then, he began building his career. After a year working for FEC Mortgage, he joined Chrysler Financial.

Voninha studied finance and after leaving URI found employment in the state Department of Health’s tuberculosis program. She often works with patients who do not speak English. That’s not a problem, since she speaks fluent Portuguese, Creole, and Spanish.


In the meantime, she gave birth to the couple’s two daughters, Vanny and Monique. Last year she made the time to complete her final credits for her degree. This year, while cramming and caring for their children she and Angelo added restaurateurs to their résumés. They own and operate the Cantinho restaurant in Pawtucket, which specializes in Cape Verdean and Portuguese food.


This month, Angelo will complete the three credits he needs for his degree when he finishes the short story class he’s taking at URI’s Feinstein Providence Campus. “I can’t wait,” he says. “I should have done it years ago.”


The couple credits Sharon Forleo, associate director of Special Programs in Talent Development, with urging them to finish their few remaining credits.


“Informally, I’ve always encouraged our students to come back and complete their work. But two years ago, I got more formal about it. I began keeping a notebook with names. It’s often a snail’s pace in finding them.”


But when Forleo finds them, she calls them before each semester. “I’m a nag,” she admits, noting that the students always intend to finish, but sometimes life gets in the way. I tell them to be a role model for their kids.”


So far, Forleo has convinced five students to complete their degrees. “I got two for one with the DaFonsecas,” she says sounding quite pleased.