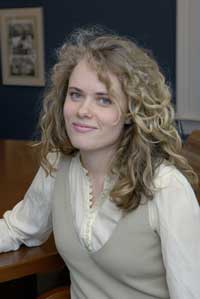 
KINGSTON, R.I. — December 13, 2006 — University of Rhode Island senior Miranda O’Hayer will travel to Buenos Aires, Argentina in February to study for five months. Some of her classes will be taught in English, others will be taught in Spanish. O’Hayer doesn’t speak Spanish.


“I wanted to do something that really scares me,” explains O’Hayer who has never been on an airplane.


O’Hayer has pursued both English and French at URI. She always thought she would study at the University d’Orleans in France where the University has a direct exchange. It would be organized and safe.


She decided to challenge herself by traveling the road not often taken. Her twin sister, Irene, who studies nutrition and Spanish at URI, inspired her. Irene studied in Puebla, Mexico and had a great experience, and so Miranda chose Argentina.


O’Hayer will be immersed in the Spanish language in Argentina but she hasn’t spoken it since high school.


“The trip will be a wonderful experience for me as a student, a traveler, and an admirer of Latin American culture,” says O’Hayer who was awarded a $3,000 Benjamin A. Gilman International Scholarship, one of 400 students to receive the award out of 1,189 applicants. Combining the scholarship and an additional $500 Gilman scholarship bonus she received through the American Institute for Foreign Study with money she has saved, she is able to pay for the trip. “It’s a lot of money,” says the North Kingstown resident who has worked long hours at the Italian Village restaurant in Wakefield to put herself through school.


O’Hayer will study at the University of Belgrano until June. “When I return, I would no longer be an undergraduate,” she says, noting she plans to take a year off and apply to graduate schools. “I view my trip Argentina to be a culmination of hard work and curiosity, as well as a step away from the past and toward future endeavors.”