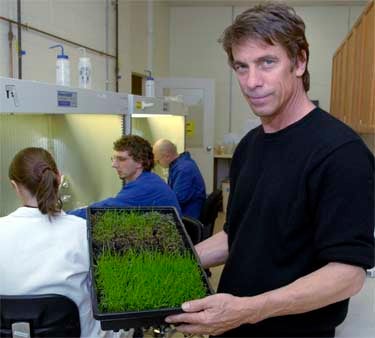 KINGSTON, R.I. – December 4, 2006 – In his 2006 State of the Union address, President Bush acknowledged the potential for switchgrass as a source of ethanol to reduce the nation’s reliance on foreign oil. Unlike corn, which is currently used for ethanol production, switchgrass can be grown on marginal soils, is useful as wildlife habitat, and requires little use of fertilizers, insecticides or irrigation.


“Switchgrass is a native plant of the tall grass prairies. It grows 12 feet tall in one season and produces 10 tons of plant material an acre, more biomass per year than most other plants,” said Albert Kausch, a University of Rhode Island plant geneticist on the cutting edge of switchgrass research. “I’m confident my lab can make it produce 20 tons an acre using the tools and personnel we have right now.” And because switchgrass is a perennial plant, it doesn’t require replanting year after year.


Kausch is a world leader in developing transgenic grasses, having spent 20 years genetically modifying turf grasses, rice and corn. He is also an expert on “gene confinement” who is working to create a switchgrass that does not flower or reproduce, thereby ensuring that the genetically modified organisms do not escape into the environment and affect wild switchgrass.


“That’s a key concern with using corn for ethanol,” Kausch said, “because some of the genes being engineered into corn to make it a better source of ethanol aren’t genes we want in the food chain. And without confinement, such as plant sterility, those genes could find their way into the corn that we eat.”


In addition, sterile plants that do not use their energy to produce flowers can use it to produce more biomass as leaves and plant material instead that in turn will produce more ethanol.


Despite having studied corn for many years, Kausch believes it may not be best choice for ethanol production. “Some critics argue that there is not enough good quality arable land available to grow the amount of corn required for biofuels, and all that we produce now is used for food instead of fuel,” he said. “Corn is also very expensive to grow compared to switchgrass.”


Kausch has launched Project Golden Switchgrass at the University of Rhode Island, which he hopes will develop “the variety of enhanced switchgrass that everyone needs.” He said that native switchgrass grown commercially today could produce ethanol for approximately $2.70 per gallon, but by genetically improving a number of plant traits he believes the production price could get as low as $1 per gallon.


“There are several impediments to the process of converting switchgrass to ethanol that would make unaltered switchgrass commercially unprofitable,” Kausch said. “We are working with professors at Brown University, for instance, to create better enzymes that will degrade cellulose into sugars for a more efficient conversion to ethanol.”


Kausch is now genetically engineering switchgrass that is both sterile and resistant to herbicides, and he has a long list of other traits he hopes to improve as well, including drought tolerance, salt tolerance and cold tolerance. He expects to have test plots of the genetically modified plants on the URI campus within two years, and he hopes the first varieties will be in commercial production by 2011.


Ethanol is a form of alcohol that burns much more cleanly than gasoline, so it results in far lower emissions when used to power automobiles and other vehicles. Since a majority of the carbon dioxide emissions that cause global warming come from transportation sources, Kausch believes that switching from gasoline to 100 percent ethanol is an important step toward halting climate change. “It won’t entirely solve the problem, but it sure will help,” he said. “And the reduced CO2 that comes from your tailpipe is then absorbed by the plants that are then turned into ethanol again, so it becomes a natural cycle.”


U.S. Senator Jack Reed, who visited Kausch’s lab in October, said “Reliable, affordable energy is critical to the economic well being of our nation and central to our national security. We need innovative initiatives and smart energy solutions, like the program here at URI, that will provide consumers with greater access to cheaper, cleaner, renewable energy solutions.”