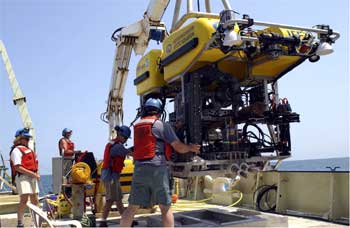 Providence, R.I. –April 5, 2007–The U.S. Naval Undersea Warfare Center (NUWC) announced today that it has awarded the University of Rhode Island with the first Center of Excellence in Undersea Technology in the United States. The Center’s mission will be to establish cooperative research, product development, technology transfer, and science and technology training and educational alliances between NUWC and other center partners. In addition to granting this award to the University of Rhode Island, NUWC is also providing $150,000 to assist in the creation of this new center of excellence and for its initial project focused on designing and building an undersea distributed network system.


“This innovative partnership will enable us to tap the expertise at both NUWC and URI to develop cutting-edge marine and defense technologies,” said Rhode Island Governor Donald Carcieri. “It will also build upon the momentum we’ve gained in becoming one of the nation’s leaders in this important field. Additionally, this Center will help us build a highly trained workforce for both NUWC and our state’s defense industry.”


The Center will be the first Navy-sponsored Undersea Technology Center in the nation to develop important dual use technology for environmental protection and management, human health impacts, aquaculture, crises management, ocean energy systems, and port and harbor security.


“I am pleased that NUWC and URI are teaming up to establish a Center of Excellence in Undersea Technology here in Rhode Island,” said Senator Jack Reed, a member of the Armed Services Committee. “This collaborative partnership will allow the Navy and URI to work together on undersea technologies that will benefit the Navy and homeland security and have practical civilian applications. This new center will bring together some of the best and brightest minds in ocean science and engineering to collaborate on critical undersea technology research.”


The Center will act as a coordinating agent to bring individual technical programs and R&D efforts together for testing and evaluation in Narragansett Bay. Under this umbrella capacity, the Center of Excellence will provide a unique opportunity for NUWC, URI, other educational institutions and leading technology companies to combine their talents and test facilities in ocean sciences and engineering to address critical naval and homeland security issues.


Malcolm L. Spaulding, URI professor of ocean engineering, and Kate Moran, associate dean for research and administration at URI’s Graduate School of Oceanography, will lead the Center. John Muench will serve as NUWC’s technical program manager. A joint board of advisors will be formed to guide the Center’s research and educational programs, and it will include representatives from the Rhode Island Economic Development Corp. (RIEDC), NUWC, URI, and private industry.


“The University of Rhode Island, as the flagship institution in our state, has long been an international leader in ocean and marine science,” said Congressman Patrick Kennedy. “I applaud this exciting partnership with NUWC and the establishment of a first-of-its-kind technology center of excellence, which allows for the sharing of new knowledge while exploring new frontiers.” 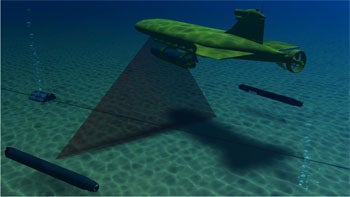 “As the chairman of the Homeland Security Subcommittee on Emerging Threats, Cybersecurity and Science and Technology, I fully understand how critical science and technology innovations are to our homeland security and national defense,” added Congressman Jim Langevin. “Having this center based at URI will position our state at the forefront of undersea research and development.”


“NUWC’s selection of the University of Rhode Island for its Center of Excellence is a validation from the industry leader that the oceanographers and ocean engineers here at URI are vital players in the development of critical new undersea technologies,” said URI President Robert L. Carothers. “The ongoing support from the Naval Undersea Warfare Center will also help considerably as the Center pursues major funding from the Office of Naval Research, the National Science Foundation, and other agencies.”


“This announcement highlights our state’s ability to attract in-state and out-of-state resources necessary to create a 21st Century innovation economy,” stated Saul Kaplan, executive director of RIEDC. “Helping to create new opportunities for collaboration between academic, public and private institutions is a key component of our state’s economic development activities. NUWC’s recognition of URI as a center of excellence is a clear validation of the University’s role as an innovative national leader in the area of underwater research and development.”